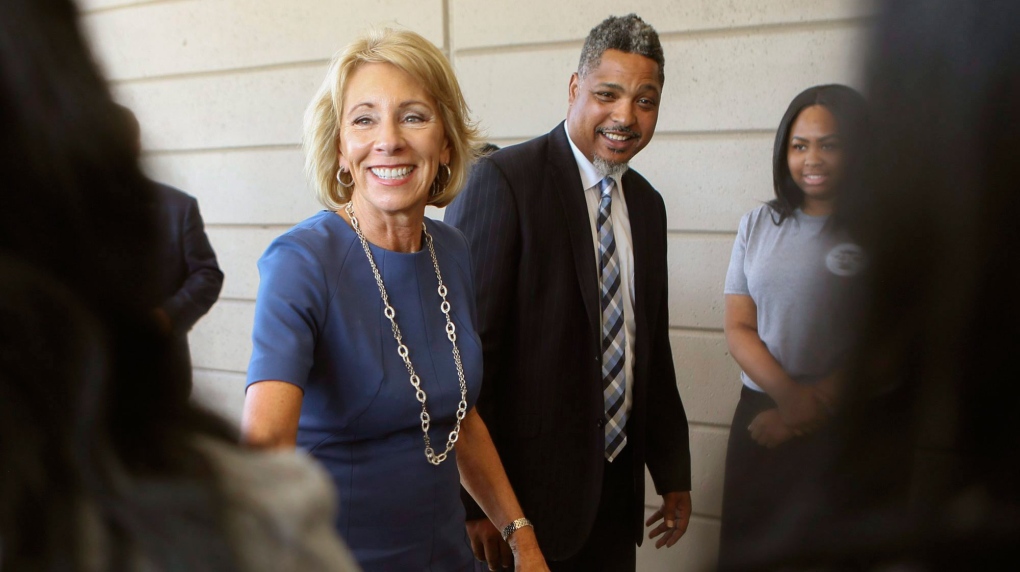 TORONTO -- U.S. President Donald Trump's education secretary, who is a vocal proponent of private schools and religious education, has cancelled a visit to Ontario, where she was to learn about its public school system, citing scheduling conflicts.

Betsy DeVos was scheduled to arrive in Toronto on Thursday.

"Due to last-minute scheduling issues that arose on both sides, Secretary DeVos's study trip to Ontario has been postponed," the U.S. Department of Education wrote in a statement Wednesday.

"Secretary DeVos looks forward to learning more about and highlighting the innovative and successful ways Ontario's educational model is meeting the needs of students and families."

But news of her upcoming visit had also angered teachers' groups and unions, who said she prioritizes the needs of private schools over the public system.

She advocates for school choice, which includes vouchers that allow kids to attend charter schools -- which are publicly funded but privately operated -- or private schools on the public dime.

DeVos has also attracted protests recently for revoking a guidance that instructed colleges on how to handle sexual assault cases, saying the previous policy was unfairly skewed against those accused of assault, and for the department of education rolling back rules allowing transgender students to use school restrooms of their choice.

"DeVos represents everything a public education advocate opposes," Ontario Teachers' Federation president Chris Cowley wrote on Twitter earlier this week. "She should keep her backwards ideas out of Ontario."

The head of the Ontario Secondary School Teachers' Federation said in a statement Monday that he was "extremely concerned" about plans to allow DeVos to visit Ontario schools.

"Ms. DeVos is a vocal proponent of programs that divert government funding away from public education and into private hands, to pay for tuition at private and religious schools," Harvey Bischof wrote in a statement.

"The Ministry of Education should reconsider this visit and send a strong, clear message to Ms. DeVos and other proponents of privatization that public education in Ontario is not for sale."

The Elementary Teachers' Federation of Ontario questioned the purpose of the visit.

"Given her record of undermining her country's public school system, I am struggling to understand why she is coming to Ontario," president Sam Hammond said in a statement.

At the Ontario legislature, the NDP called on the government to not allow DeVos to tour schools in the province.

"Why is this government giving a platform to someone who believes that government should be spending less, not more, on public education?" asked New Democrat Peggy Sattler.

Hunter has said DeVos could learn a lot from Ontario's public school system.