Two people in wheelchairs rescued from burning home in Markham 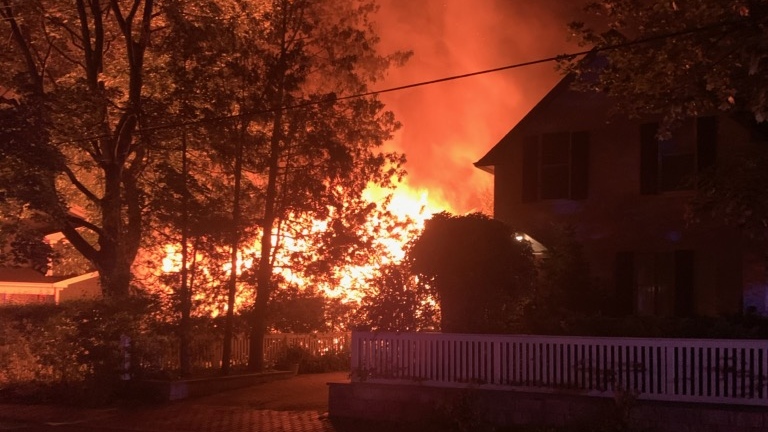 Flames are seen coming from a house fire on Colborne Street in Markham on Thursday morning.

Two people in wheelchairs were pulled from a burning home in Markham overnight.

Emergency crews were dispatched to the residence on Colborne Street, near John and Yonge streets in Thornhill Village, at around 2 a.m.

Four York Regional Police officers arrived on scene first and were greeted by a teenaged resident outside the home, who informed them that her disabled dad and sister were both trapped inside.

All four residents of the home – a father, a mother and their two daughters- were taken to hospital with smoke inhalation, as was one of the officers who went inside. The other three officers were treated at the scene for smoke inhalation.

“My understanding is we got here very very quickly,” Cont. Laura Nicolle told reporters, explaining why police were first into the burning home. “We were in the area already because of the fact that we’re out doing patrol on a nightly basis. They’re able to respond quite quickly. My understanding is they got here right away and they were the first on scene. They made the call they needed to make.”

She said officers did not have any special equipment to deal with the fire. However everyone who went to hospital is expected to recover.

“I’m told they are expected to recover from their injuries, which is the best news to possibly get in a situation like this. The damage is obviously very significant so it is amazing that no one was harmed seriously,” Nicolle said.

Speaking with CP24 at the scene, Deputy Fire Chief Adam Grant said that it took about two-and-a-half hours to extinguish the fire following the initial rescues.

He said that it was “a very, very stubborn fire” that “extended up into the second floor and got into the attic space.”

“It is an older home that has had additions over the years which makes fires really challenging to fight especially when it gets up into the attic space because you have many void spaces that are created because of the extension. It makes it really difficult for us to get to the seat of the fire,” he said.

The cause of the fire remains unknown.

“At this point we are investigating the cause of the fire,” Nicolle said. “The Ontario fire marshal is on scene working with our investigators to determine that. My understanding at this early stage is that it doesn’t appear suspicious at this point.”

She said police are aware that fireworks were being set off in many areas around the city last night, but it’s too early to say whether that might have been a possible cause.