Town of Milton says creepy Halloween display can stay, despite complaint from resident

TORONTO -- Less than 24 hours after a bylaw officer issued a Milton homeowner a warning to get rid of some of his Halloween display, the creepy spectacle was saved.

Mitch Garber has been running a haunted house in front of his home every year since 2013. He uses it as a fundraiser for the Kidney Foundation, an organization he cares about deeply after his own battle with kidney failure.

But a complaint about the creepy display almost derailed his Halloween plans.

Garber said that someone had complained to the city about the gore and imagery in his decorated yard. They also alleged there was a potential impediment on the sidewalk. 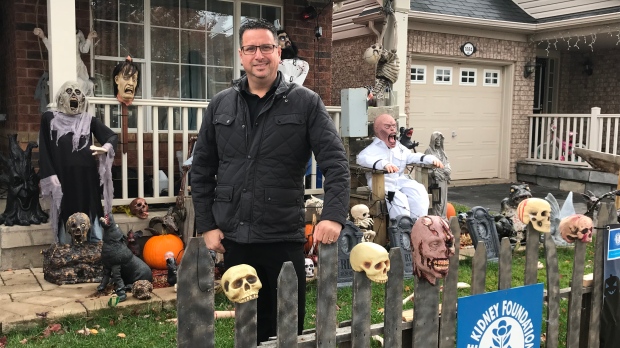 But Garber said that most residents have been incredibly supportive of his haunted house.

“People are angry with the town, they’re angry with the person themselves for complaining, you know just let it be,” Garber told CTV News Toronto. “We’ve had a lot of support from the town.”

Local Coun. Mike Cluett said that town officials worked all day Tuesday to find a solution. He said that the discussion wasn’t about the potentially disturbing elements in front of the home.

“This is Halloween, so these are Halloween decorations. We weren’t enforcing anything to do with the level of gore that was there, because we didn't find any need for it.” However, some of the decorations were on town property. After receiving the complaint, the bylaw officers warned Garber that he would have to clean up that section of the property or face a fine.

Instead the town has given Garber an extension to clear up the pretend bone yard that is on the town-owned part of Garber’s yard—until Nov. 1, after Halloween.

“(Garber’s) been given an extension to have this all cleaned up by Nov. 1 and to have a few minor modifications made to make sure the sidewalk is not impeded,” Cluett said.

Garber told CTV News Toronto that he hasn’t heard any other complainants about his display.

“No one has come up to us and said ‘oh, this is horrible take it down.’ I have neighbours on both sides of me who are like ‘what do you need? Use my property, use my garage, take these props down, put them on my Boulevard.’”

In the six years that Garber’s run the freaky fundraiser, he has raised about $40,000 for the Kidney Foundation. His goal this year is to pass $50,000.

However, he wishes he never had to go through the complaint process to begin with.