TORONTO -- A Toronto restaurant has sent Ontario Premier Doug Ford a $431 invoice for beer they say will spoil as a result of the provincewide shutdown.

Michael Hunter, co-owner of Antler Kitchen & Bar in the city’s west end, told CP24 that he sent the premier an invoice for two kegs of beer he purchased after being told Toronto restaurants could reopen their patios.

“We haven't been buying draft beer because we can't sell draft for our curbside pickup and takeout, so for the patio weekend we decided okay, we're open for the patio, now let's buy these kegs,” Hunter said. “We tapped the kegs, hooked them up to our lines, had the lines cleaned, only for a week later told now we have to shut down.”

“Once a keg is opened, it has a shelf life.’

Two weeks ago restaurants in the grey zone of Ontario’s COVID-19 lockdown framework were allowed to reopen their patios. The news was highly anticipated by businesses in Toronto and Peel Region that had been shuttered to in-person dining all winter.

But with the announcement of a provincewide shutdown, those same restaurants now have to close their outdoor dining areas.

Under the new regulations that went into effect at midnight, in-person dining—both indoors and outdoors—is prohibited.

“These openings and closings after two weeks, they have an effect on us,” Hunter said, adding that the invoice is a "statement" and doesn’t include the cost of additional food and staff hired.

“We’re more in debt today than we were two weeks ago before we were told we could open the patio.” 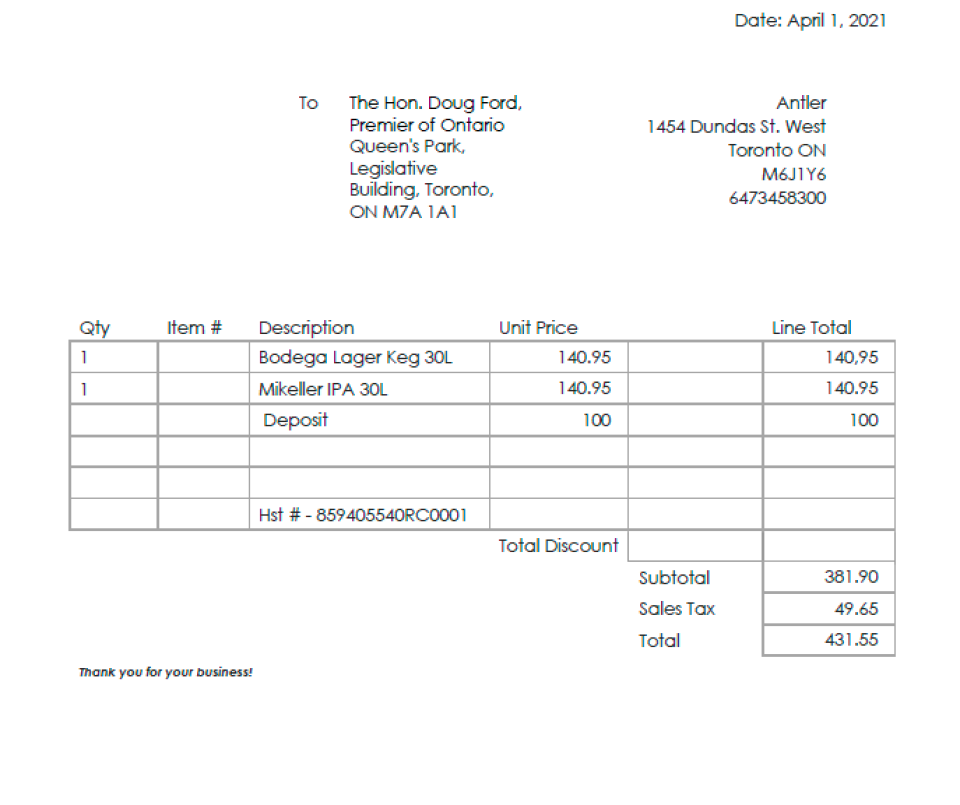 In a letter sent along with the invoice for $431.55, Antler Kitchen & Bar says that the reopening of patios “was a path for our business to survive.”

“You say you care about Toronto's restaurants,” the letter to Ford says. “And we know you care about beer. So we’re sending an invoice to you for two kegs worth of beer that will spoil because of this shut down. We bought them because you said we could re-open.”

“So now that you’ve closed us down, we know you will be glad to cover the cost and take them off our hands. They might go down well at the next cabinet meeting.”

Hunter said that while he isn’t a medical expert, the service industry, along with other businesses completely shuttered during the shutdown, has been hardest hit during the pandemic.

“It’s literally just been a nightmare.”

A spokesperson for the premier did not comment on the invoice, but said that the government recognizes that the pandemic "has had a devastating impact on all Ontarians."

“At a time when case counts are increasing unsustainably and intensive care units are immensely strained, risking care, the hard decision to implement the emergency brake provincewide was necessary and the right thing to do. We must continue to respect the advice and recommendations of public health officials and the Chief Medical Officer of Health."

Indoor dining has been prohibited in all grey zone regions since the inception of the Ontario COVID-19 lockdown framework in early November.

Areas such as Toronto and Peel Region have never left the grey zone, while other Ontario public health units have moved back and forth among the five tiers.

In the red zone, which is just below the grey zone, indoor dining was allowed with a 10-person limit.

At the same time outdoor dining was given the green light in the grey zone, the province made adjustments to the red zone allowing restaurants to operate at either 50 per cent capacity or up to 50 people, whichever one is reached first with a two-metre distance between customers.

The provincewide shutdown that started on April 3 is expected to last at least a month.