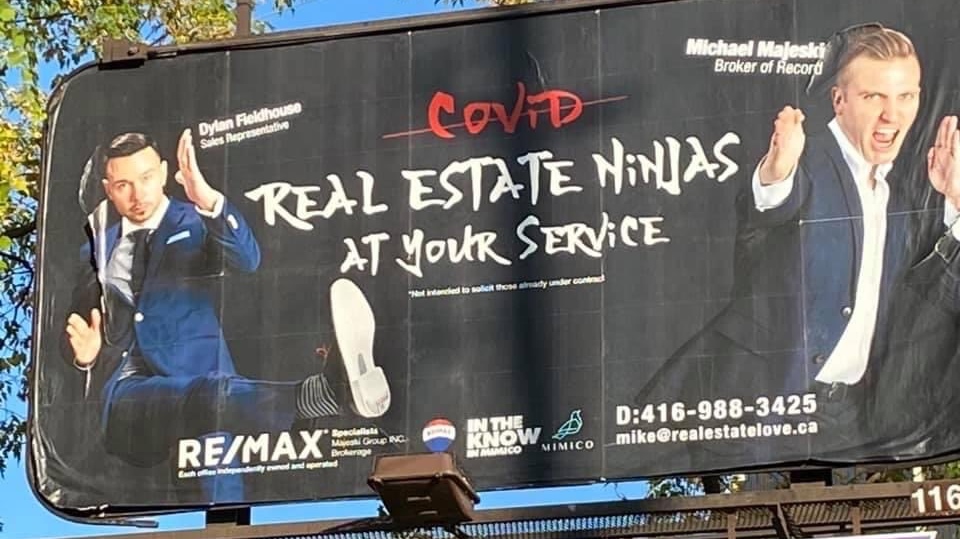 The Re/Max advertisement was originally placed at a high-traffic area on Royal York Boulevard near Lake Shore Boulevard, where it was spotted by local chef and founder of Quell, a talent agency focusing on diversity in the food and hospitality industry.

“I just think everything about it is tone deaf,” Trevor Lui told CTV News Toronto. “My position here is that the use of ads like this has to stop. And I'm tired of having to remind people that it has to stop.”

“There's a million ways to advertise and be tasteful. This is not one of them.”

The advertisement depicts two non-Asian men in karate poses. In between the two men is the word “COVID” crossed out. Underneath it says “real estate ninjas at your service.”

Nah bros ... this shit is (I shouldn’t have to say it). You know better. pic.twitter.com/SZ4rf9SErc

Lui said that the advertisement used “deliberately chosen Asian-style font” and shows how the entire system for marketing is deaf to racial undertones.

“This had to go through the brokerage, the marketing team, REMAX corporate Canada, a graphic designer, a photographer, and a billboard owner....So you're talking about nine layers of systematic tone deafness.”

A number of other people also took to social media to express their disappointment, calling the billboard “offensive” and “awful.”

@realestateheart your billboard is awful and offensive.
I’m irritated, but mostly I’m tired that so many people like you live with blinders on and haven’t done the work to understand why this is wrong. Your ignorance is showing.
Do better.
(Typo in my 1st tweet: *consider)

“The casual racism! The terrible form! The fonts! The random COVID slapped on there! Choices were made,” another Twitter user said.

Re/Max Integra said in a statement that they were not aware of the billboard prior to it being erected.

“The messaging in the advertisement directly conflicts with our values and belief in equality, inclusiveness and access to homeownership for all. As part of a global franchise brand, our next step will be to alert the franchise owner with whom these agents work to address this as soon as possible,” the company said.

Realtor Michael Majeski, who is featured on the billboard, said that he was surprised to read the responses to his advertisements but that, looking back, he sees “a lot of validity in what people are saying.”

“I am learning to unlearn a lot of my white privilege so that I can best support our diverse community,” he said in a statement. “I not only apologize for the insensitivities of our billboard ad, and have already worked to have it removed immediately; I am also apologizing to anyone who felt belittled by our insensitive message. It will not happen again.”

Majeski went on to say that the other realtor on the billboard, Dylan Fieldhouse, was not responsible for the advertisement.

“I am 100 per cent responsible for this poor decision.”

The billboard is owned by Outfront Media and a spokesperson told CTV News Toronto that the advertisement has been removed.