Toronto Raptors have been eliminated from NBA playoff contention 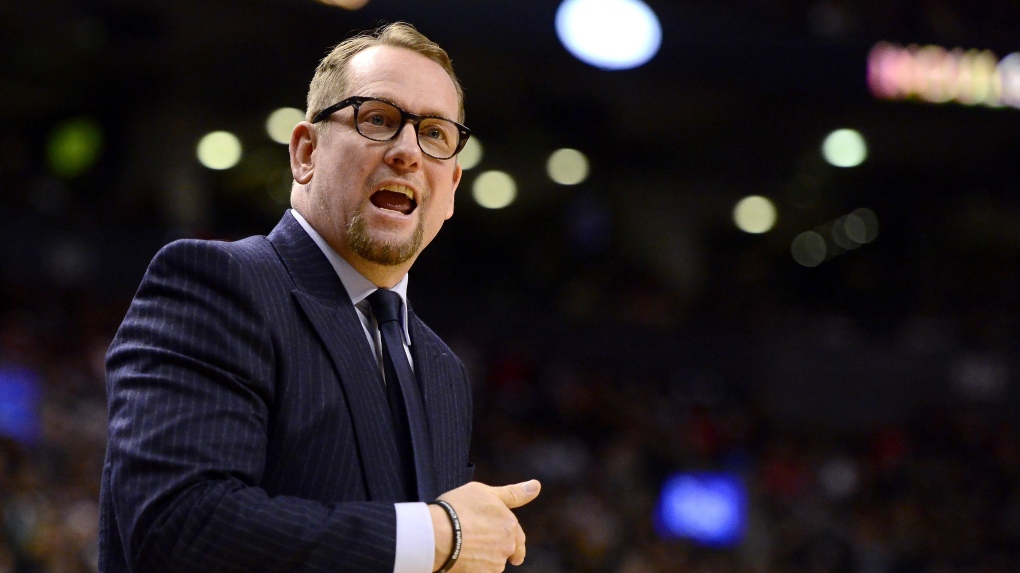 Toronto Raptors head coach Nick Nurse directs play from courtside during first half NBA basketball action against the Brooklyn Nets, in Toronto, Saturday, Feb. 8, 2020. Nurse said while the NBA is set to resume play late next month in Orlando, virtually none of the talk with his coaches and players over the past couple of weeks has been about basketball. THE CANADIAN PRESS/Frank Gunn

TORONTO -- Two years after their thrilling run to the Larry O'Brien Trophy, this Toronto Raptors season will also go down as one of the most memorable in history -- but for all the wrong reasons.

The Raptors were officially eliminated from a spot in the NBA's post-season play-in tournament on Monday with the Indiana Pacers' 111-102 victory over the Cleveland Cavaliers.

After a season playing in Tampa, Fla., as the only team playing outside of its market this season, and a COVID-19 outbreak in March that saw them nosedive down the conference standings, the Raptors will miss the playoffs for the first time since 2013.

With four games left in a bizarre regular season, Raptors coach Nick Nurse preferred not to look back on the numerous challenges tossed at his team and what he learned from how they handled them.

"I'm not sure I'm kind of ready to dig into that quite yet," he said after Monday's practice. "My mind is not quite there yet. We've talked about it a bunch: What did we learn? Well, things can get really bad and adverse and somehow you've got to keep picking yourself up and getting yourself rejuvenated and bringing positivity and keep coaching and all those things."

Because of Canada's border restrictions around COVID-19, the Raptors were forced to move to Tampa for the season, playing their "home" games at Amalie Arena, normally home to the NHL's Lightning.

A far cry from the jam-packed crowds of 20,000 at Scotiabank Arena they're used to, some nights it's tough to tell which team the sparse (due to COVID restrictions) crowd is cheering for. Pascal Siakam was booed during late-game free throw attempts last week.

Not overly surprising for a team that had to juggle finding housing in Tampa with games and practices, the Raptors got off to a shaky 2-8 start to the season, but they ended February in the thick of the playoff race at 17-17.

March was a month the Raptors would've liked to have ripped off the calendar and tossed.

A COVID-19 outbreak sidelined a good chunk of the Raptors roster, including key players Siakam, Fred VanVleet, and OG Anunoby, plus the majority of coaches. They struggled after their returned to find their form after illness and quarantine measures. And then VanVleet (hip) and Kyle Lowry (toe) suffered injuries that would bother them for weeks.

Nurse said this final stretch will be partly about evaluating and developing young players.

"There's a couple of guys we'll probably give some runs to that we want to see still a little bit more," he said.

He's "extremely optimistic" about next season.

"I think we've played some of the best teams maybe better than a lot of teams have, to be honest, and we've been missing a lot of pieces along here," Nurse said. "I think we have an incredible group of talented young guys and we've got a group that's growing day by day."

The Raptors host their former star Kawhi Leonard and the Los Angeles Clippers on Tuesday, then visit Chicago on Thursday and Dallas on Friday before closing the regular season Sunday against visiting Indiana.

Asked if he'll travel back to Toronto or to his hometown in Carroll, Iowa, after the season, Nurse said he and the Raptors management planned to stay in Tampa.

"We're gonna operate still here from Tampa for a while, just with draft prep and exit interviews," he said. "All that stuff will stay here. I don't see any movement north for quite some time yet."

This report by The Canadian Press was first published May 10, 2021.