According to police, the service will launch a dedicated enforcement team in all sixteen divisions whose "primary function will be to respond to large gatherings in both indoor and outdoor settings."

The divisional teams will be coordinated from a central command, police said, which will allow officers deployed across divisional boundaries if required.

Police said they will focus on large gatherings that fail to comply with emergency orders, with a "particular focus on indoor gatherings such as parties at short-term rentals or at bars and restaurants."

The new enforcement teams launched at 5 p.m. on April 22.

"We are at a critical stage of this pandemic," Toronto Police Chief James Ramer said in a statement Wednesday. "COVID-19 is now a matter of public health and public safety. The Toronto Police Service will enforce the provincial orders and will work with the city’s bylaw officers and Toronto Public Health to enforce the measures that will help slow the rapid spread of COVID-19 that is putting public safety at risk."

What to expect from police

Police emphasized that they will not be conducting random stops of people or cars and there are no changes to their powers.

"Individuals are not compelled to explain why they are out of their residence, nor is being outside evidence of a failure to comply with the emergency order," police said.

Police also said that workers are not required to have proof from their employer that they are traveling to or from their workplace. 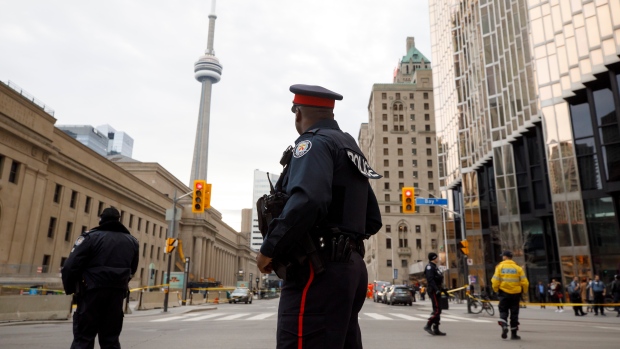 Enforcement measures will not apply to vulnerable people in encampments or those experiencing homelessness, police said.

Police said they will not enter homes for the "singular purpose" of checking compliance with the stay-at-home order.

"However, officers can enter a property if they have reasonable and probable grounds to believe there is non-compliance, such as when investigating a complaint of a loud party. Officers may exercise their discretion in every situation and where there is evidence of non-compliance, they will issue tickets and summonses for individuals and businesses."

Police said if a person refuses to identify themselves in order to issue a ticket or summons, they can be arrested and in some cases charged with obstructing a police officer.

Ontario's stay-at-home order, which legally only allows people to leave their home for an essential reason, remains in effect until at least May 20.

Last week, Premier Doug Ford's government said police would be given special powers to stop people and ask why they’re out during the stay-at-home order.

A day later, Ford backtracked on this decision after it caused swift and furious backlash.