TORONTO -- Toronto Mayor John Tory apologized on Sunday for not properly wearing a mask during his visit to Trinity Bellwoods Park on Saturday.

Images of the mayor talking to people at the downtown park with his mask pulled down circulated on social media, sparking backlash from online users.

In a statement, Tory said he was disappointed by his behaviour.

"I want to apologize for my personal behaviour yesterday," Tory said.

"I fully intended to properly physically distance, but it was very difficult to do. I wore a mask into the park, but I failed to use it properly, another thing I'm disappointed about. These were mistakes that I made and as a leader in this city, I know that I must set a better example going forward."

Last week, public health officials strongly urged the public to wear a mask in situations where physical distancing is impossible.

Many online users also criticized the mayor for not following physical distancing rules during his visit at the park.

Speaking to CP24 on Sunday morning, Tory said he went to the park Saturday night to assess the situation.

"I saw a crowd scene that was completely out of control relative to what we have been saying people should do... (People) were sitting in big groups really close together," Tory said.

"I just was dumbfounded by this kind of lack of personal responsibility." 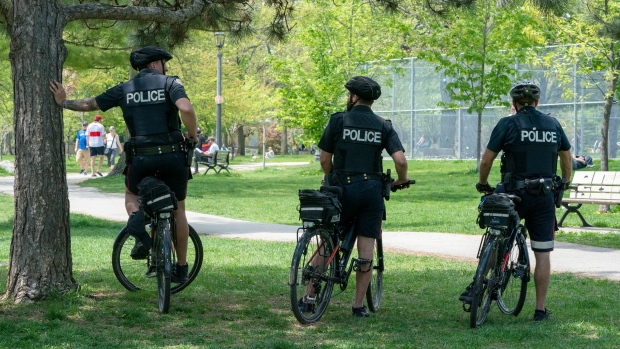 Bicycle police officers keep an eye on Trinity Bellwoods Park in Toronto on Sunday, May 24, 2020. THE CANADIAN PRESS/Frank Gunn

The park was less crowded and much quieter on Sunday as enforcement ramped up to ensure that the incident on Saturday is not repeated.

According to the city, four tickets were issued to visitors of Trinity Bellwoods who allegedly disobeyed physical distancing by-laws and provincial orders.