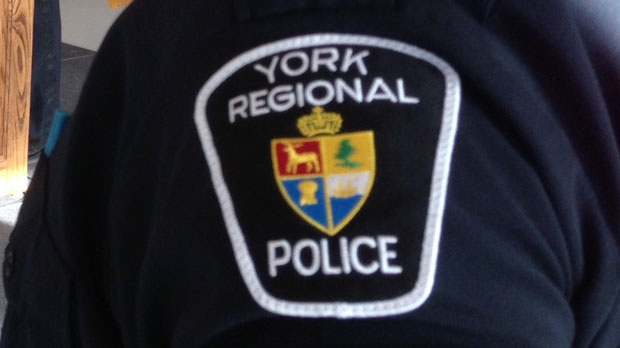 A York Regional Police badge in seen in this file photo. (Mathew Reid/CP24)

RICHMOND HILL, Ont. -- Police north of Toronto say a man pointed a laser at one of their helicopters just hours after the launch of a federal campaign meant to highlight the dangers of pointing lasers at planes.

York Regional Police say the Air2 helicopter was flying over Richmond Hill, Ont., just after midnight Wednesday when the pilot and tactical flight officer were struck by a bright light source.

Police say the crew was able to direct officers to the location of the suspect, who was then arrested and charged.

Valeri Korakhashvili, 22, of Toronto, is charged with endangering persons on an aircraft in flight and obstructing a peace officer. He is due in court on June 29.

Police say the pilot and tactical flight officer were taken to hospital as a precaution.

A government campaign meant to highlight the issue was unveiled Tuesday as the government tries to address what is fast becoming a serious danger for pilots and air travellers.

The number of laser incidents reported to Transport Canada has increased in the last few years.