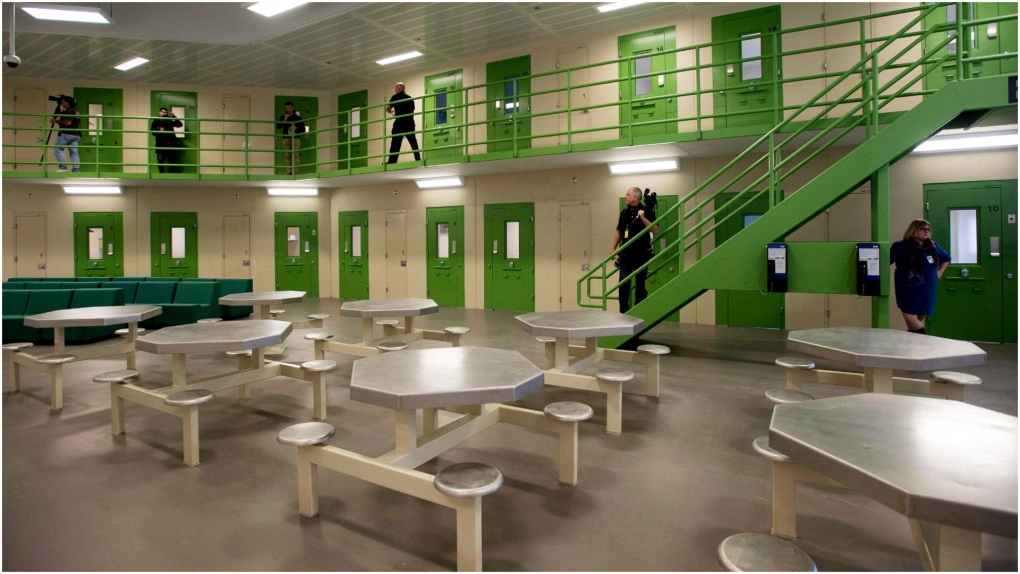 The general inmate facility is shown during a media tour of the Toronto South Detention Centre in Toronto on Oct. 3, 2013. A pair of newly released reports show two countries inching in opposite directions on law and order, with Canada gearing up for an era of tougher sentencing just as the United States' winds down. THE CANADIAN PRESS/Nathan Denette

TORONTO -- An inmate at the Toronto South Detention Centre (TSDC) has tested positive for COVID-19, according to the Ministry of the Solicitor General.

“Upon admission, the ministry was made aware by local public health that the inmate was identified as a possible COVID-19 related case and was immediately placed in isolation,” ministry spokesperson Brent Ross said in an email Wednesday. “TSDC has maintained operational protocols related to infection prevention and control and has taken all appropriate steps to protect staff and other inmates”

Ross added that no isolation protocols were breached during admission to the detention centre or while the inmate was in custody.

The TSDC has “precautionary containment measures” in place if an outbreak of communicable disease occurs or is suspected, Ross said

“Institution health care staff [is] working collaboratively and under the direction of the local Medical Officer of Health [to] manage the situation, including containment strategies such as medical isolation.”

The news comes after an employee at the same detention centre was hospitalized and tested for the virus last week.

The Ontario Public Service Employees Union (OPSEU), which represents correctional workers in the province, said that the employee had recently returned from an “out-of-country” trip and returned to work before the 14-day self-isolation guidelines were put into place.

“He went to work but as soon as the protocols were put in place, he went to his boss apparently and said ‘I was out of country,” union leader Warren “Smokey” Thomas said at the time.

According to OPSEU, the male employee has since tested positive for COVID-19.

On Friday, the Ministry of the Solicitor general announced new measures to help curb the spread of COVID-19 within the provinces adult correctional facilities, including expanding the use of temporary absences for intermittent inmates.

“As Ontario continues to act to slow the spread of COVID-19, we are making further changes to protect our frontline workers and our health care system from the burden an outbreak in our correctional system would cause,” a news release issued by the Ministry of the Solicitor General said at the time.

Under the new measures, senior corrections officials are able to expand the use of temporary absences, as well as allow the Ontario Parole Board to use alternatives to in-person meetings – electronic or written means, rather than solely in-person.

Going forward, correctional services will now have the option to issue temporary absences “beyond the current 72-hour maximum.”