TORONTO -- Toronto could get up to 15 centimetres of snow on Saturday as it gets hit with what one city official is calling “an all hands on deck storm.”

Environment Canada Senior Climatologist David Phillips tells CP24 that the snow will likely begin falling in the Greater Toronto Area at around 8 p.m. tonight and will continue through Saturday morning. He said that he expects the bulk of the snow to fall by around noon on Saturday with a possibility for it to transition to ice pellets or rain after that.

Environment Canada said that blowing snow due to strong winds could also reduce visibility in some areas, making travel hazardous.

“It is just one of these one-week wonders. Last Friday we were talking about the storm coming and it was record warm and record rain. This one is mostly about the snow,” Phillips said. 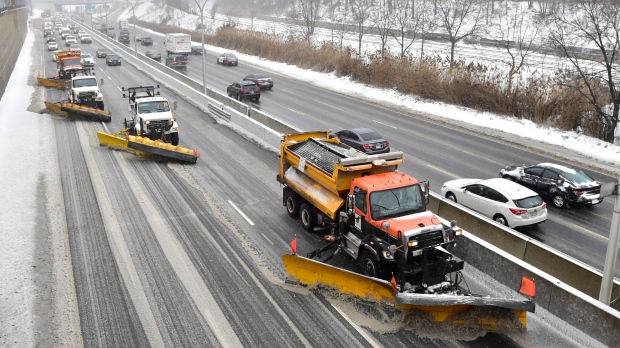 Toronto's superintendent of road operations Mark Mills told CP24 on Friday morning that a salt brine has been applied to the surface of many roads in advance of the arrival of the storm.

He said that the hope is that the brine “will prevent the snow from bonding to the pavement,” thereby making it easier for plows once they hit the roads Saturday morning.

“With a forecast like this it is an all hands on decks storm so we will have our 600 plows out, our 300 sidewalk plows and our 200 salt trucks. Probably 1,100 staff will be involved over the weekend,” he said. “Our goal is to get this clear for the Monday morning rush so if you see trucks out there please give them the time and space necessary. We are here to help.”

The city begins plowing on expressways once the total accumulation of snow reaches 2.5 centimetres, on main arterial roads once five centimetres of snow has landed and on local roads after eight centimetres.

“Tomorrow morning it looks like between 9 a.m. and noon we will have enough snow to plow so if you are going out be mindful for that,” Mills said. “If you don’t need to be driving maybe use the TTC, walk or consider staying home.”

Be aware of your surroundings whether you're driving, walking or cycling. #ONStorm pic.twitter.com/Z1aPMaRolO

Toronto and much of southern Ontario are currently under a snowfall warning in anticipation of the storm.

Toronto’s Medical Officer of Health Dr. Eileen De Villa also issued an extreme cold alert on Thursday. The temperature is expected to only go up to – 8 C today before falling to – 13 C overnight. The wind chill, however, will make it feel closer to – 20.