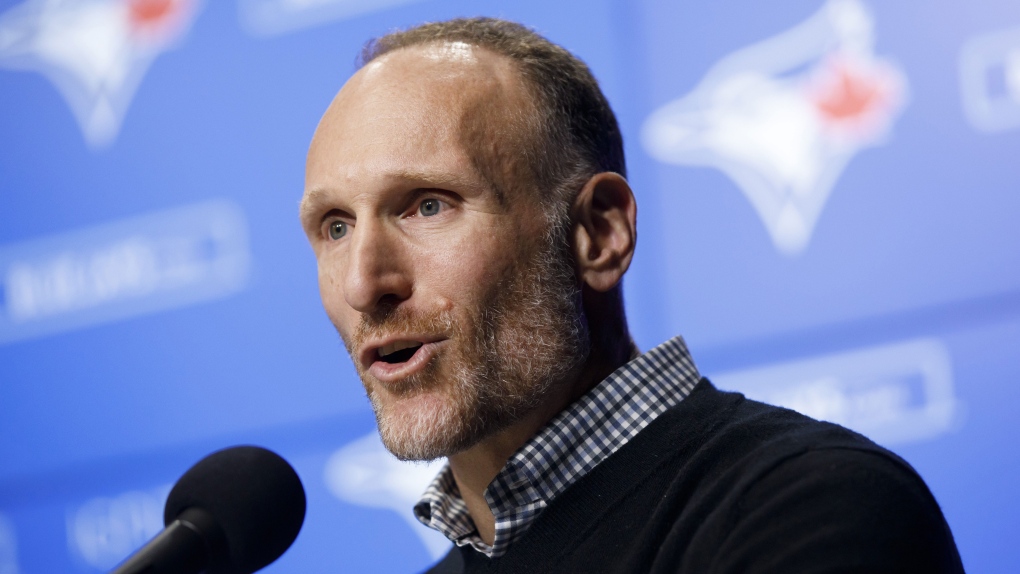 Toronto Blue Jays president Mark Shapiro is seen during a press conference announcing the signing of Hyun-Jin Ryu to the team, in Toronto, Friday, Dec. 27, 2019. THE CANADIAN PRESS/ Cole Burston

TORONTO -- Short on specifics and long on bullishness, Blue Jays president Mark Shapiro set an optimistic tone during his first general media availability since the team was eliminated from the post-season a few weeks ago.

While little clarity was offered on his contract situation and plans for 2021, Shapiro said his time in Toronto has been life-changing and he's excited about the progress that has been made.

"I want to be here, both from a personal perspective and maybe most importantly, I want to finish the job," said Shapiro, whose contract expires this year. "I want to be part of bringing a world championship back to Toronto and Canada."

When big-league baseball actually returns to the city remains uncertain. Border restrictions forced the Blue Jays to play most of their home games in Buffalo during the truncated 60-game season.

Despite the lack of gate revenue in 2020, Shapiro said there has been "consistent support" from ownership and "consistent encouragement" to progress with team plans, including the pursuit of free agents.

"If we think that the right deals are there and we make those recommendations, the resources are going to be there for us to add in a meaningful way," he said. "We will conduct this off-season much like last off-season."

The Blue Jays' biggest move last winter was the free-agent signing of Hyun-Jin Ryu to a US$80-million, four-year deal. He was a reliable ace in the starting rotation as Toronto rose out of a three-year rebuilding rut to a 32-28 mark, good for the eighth and final seed in the American League playoffs.

Shapiro said that before 2021 payroll plans are determined, meetings will be held with baseball operations staff, scouts, analysts and coaches.

"We will continue to progress with those meetings into a presentation about a month from now to our ownership group, where we'll make a recommendation on payroll for next year, tied to a budgeting process," he said.

It was a season of development for the team's young core of Bo Bichette, Cavan Biggio, Vladimir Guerrero, Jr., Lourdes Gurriel, Jr., Teoscar Hernandez, Nate Pearson and others.

Team defence is an area that general manager Ross Atkins has said he'll be looking to upgrade in the off-season. With several pending free agents, starting rotation depth will need to be addressed along with potential improvements at third base and in the bullpen.

Shapiro said defensive play and strike-throwing were two areas that he'd like to see improved. He added that he was impressed by the growth of young players and the team's depth and versatility.

"There were so many things that could have been built-in excuses for our players and they refused to take those excuses," he said. "They chose instead to focus on what they could control.

"And to me, those attributes and traits are markers of a championship makeup and personality and a tremendous amount of character."

The Blue Jays survived an uneven start to the season and showed they could hang with the top contenders. MLB's expanded playoff structure helped Toronto get a taste of the post-season, although it ended quickly in a wild-card series sweep by the Tampa Bay Rays.

The 2021 pre-season is set to begin in just over four months, but it's difficult to lock in plans for spring training and the regular season due to the pandemic.

Shapiro said he feels optimistic that the Blue Jays will play in Toronto next year, but acknowledged the team may have to consider alternate options again if needed. The availability of Buffalo's Sahlen Field could also be in question if minor-league play resumes in 2021.

There were some low points over the last season, notably recent job cuts to the team's business operations and baseball operations staff.

In addition, reductions throughout baseball's minor-league structure are expected to be finalized over the coming weeks.

Shapiro said he has yet to receive firm answers on what might be in store but he's expecting that short-season minor-league baseball will not look the same. He added that a report saying the Blue Jays' class-A team in Vancouver would be affiliated with the Oakland Athletics next year was inaccurate.

To put a bow on things, there was certainly a lot to take in over a 2020 season that won't soon be forgotten.

The good news for fans of Canada's lone MLB team is that the future still looks bright. The Blue Jays are a team on the rise with a shot at becoming a legitimate contender over the next year or two.

"This season gave us a tremendous window into their resilience, their determination, their perseverance and their toughness," Shapiro said.

This report by The Canadian Press was first published Oct. 21, 2020.