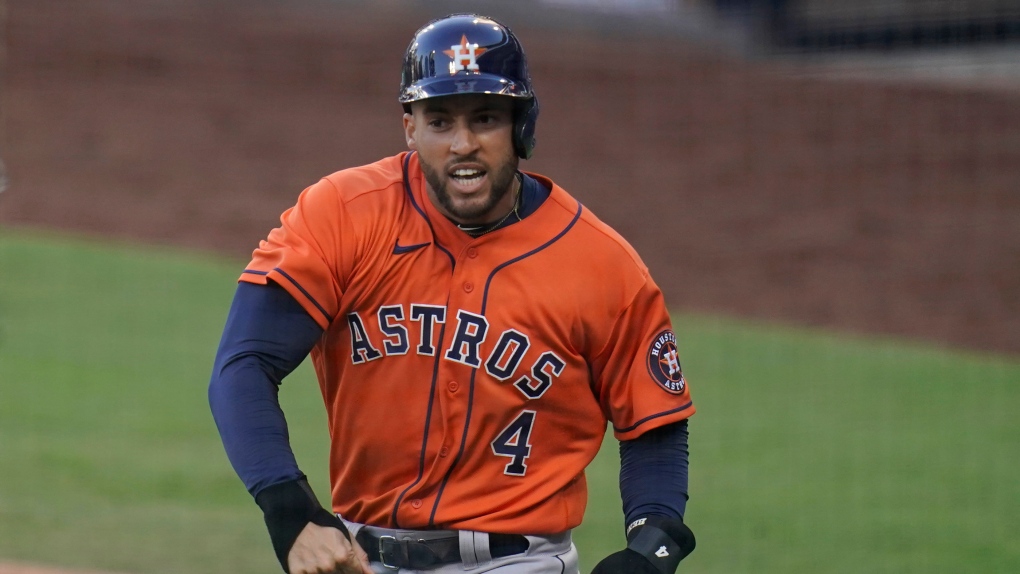 Houston Astros George Springer reacts after scoring on a single by Jose Altuve against the Tampa Bay Rays during the fifth inning in Game 6 of a baseball American League Championship Series, Friday, Oct. 16, 2020, in San Diego. (AP Photo/Gregory Bull)

TORONTO -- George Springer said he's excited to be a part of a young, talented team like the Toronto Blue Jays, a club he believes has plenty of potential.

The three-time all-star outfielder was introduced by the team Wednesday after signing a US$150-million, six-year contract last week.

"At the end of the day I wanted to go to where I believed I was going to be happy," Springer said. "And I believe I am."

Springer, one of the top players in this year's free-agent class, put on a white Blue Jays uniform at the start of a 40-minute video call with reporters, adding with a smile that it was "a good fit."

Springer, 31, made his big-league debut with the Houston Astros in 2014 and spent seven seasons with the team. He was the World Series MVP in 2017 and won the AL Silver Slugger Award in 2018 and '19.

The Blue Jays, meanwhile, are looking to build off a 32-28 campaign that saw them return to the post-season for the first time since 2016.

Springer said being part of a team that has a strong young core with players like Bo Bichette, Cavan Biggio, Vladimir Guerrero Jr., Lourdes Gurriel Jr., and others was an appealing draw.

"The way that the front office has really gotten behind their guys, the message is that they really believe in this team," Springer said. "That's obviously really important to me."

It has been a busy month for Canada's lone big-league club. The Blue Jays also recently signed right-handers Tyler Chatwood and Kirby Yates, the 2019 MLB saves leader, to one-year deals.

A reported $18-million, one-year deal with infielder Marcus Semien is expected to become official later this week upon completion of a physical.

Springer's arrival provides an anchor in the heart of Toronto's batting order and a steady presence in centre field.

The 31-year-old was a powerhouse in the Astros' 2017 World Series win over the L.A. Dodgers, a title now tainted by the Astros' sign-stealing scandal.

It remains uncertain where the Blue Jays will play this year and when spectators might be allowed to return to Rogers Centre. Border restrictions forced the team to play home games in Buffalo last year.

This report by The Canadian Press was first published Jan. 27, 2021.