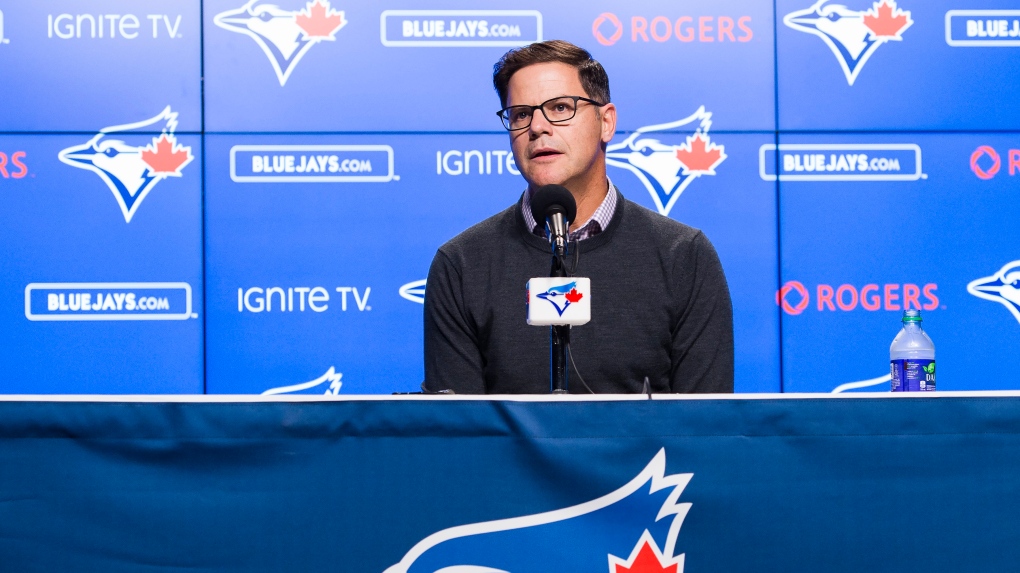 Ross Atkins, general manager of the Toronto Blue Jays, speaks to the media during the end-of-the-season press conference in Toronto on Tuesday, October 1, 2019. THE CANADIAN PRESS/Nathan Denette

TORONTO -- There is plenty to like about the youth movement building within the Toronto Blue Jays. The question now is how long will it take for those youngsters to play meaningful games.

Bo Bichette looks like the real deal. Cavan Biggio flashed some of his potential. Vladimir Guerrero Jr. can hit the ball harder than anyone.

Rookies were front and centre for the Blue Jays during a challenging 67-95 season. They were given a chance to play in a campaign marked by roster overhaul and the departure of several veterans.

An interesting off-season awaits as general manager Ross Atkins is tasked with building on the Jays' nucleus and strengthening a team that has more holes than certainties at the moment.

The pressure will be on to improve a club that finished a distant fourth in the American League East.

"We are very excited about the young core that has transitioned this year and we see that as a positive step," Atkins said at his season-ending media availability on Tuesday. "But it didn't come without a ton of frustration. We obviously understand how difficult that was for fans and it was very difficult for us.

"But now we shift our focus to continuing to build upon this young core. We feel that we have the flexibility and an incredible opportunity ahead of us to do that."

Atkins didn't get into specifics on spending plans, but did say the approach would be more like the one used after the team's playoff runs in 2015 and 2016.

"(We'll) be much more open to different structure and term," he said.

Armed with plenty of flexibility thanks to a low payroll, Atkins added the team would be open to taking on salary in the right circumstances.

He made it clear his top priority is improving the situation on the mound.

"We'll look to add pitching in every possible way," he said. "Free agency is obviously one way. We'll consider trades if they're there. We have to continue to think about developing the core that is here and the group that is here.

"It's not good enough just to have depth. You have to have major-league pieces and guys that can contribute in significant ways."

In 2019, the starting rotation was essentially gutted, overall defensive play was suspect and offensive output was inadequate.

The turnstiles have quieted and the remaining fanbase has been left wondering when things might turn around. With Atkins and president Mark Shapiro both with one season left on their respective deals, it's unclear whether they'll be extended and get the chance to follow through on their long-term vision.

Shapiro said the priority right now is moving from "competing to winning."

"Certainly when you look at where the needs are on our team, it doesn't take a whole lot of in-depth analysis to know starting pitching is probably our greatest opportunity to make those leaps," he said.

Trent Thornton, Jacob Waguespack, Sean Reid-Foley, Ryan Borucki, T.J. Zeuch and Anthony Kay will likely be in the mix for spots on a rotation currently without an ace.

The Blue Jays have a stud pitching prospect in Nate Pearson, but the team is in desperate need of front-of-the-rotation depth. Closer Ken Giles, who is eligible for arbitration, was a steady anchor for an overworked bullpen.

The trade-deadline departures of starters Marcus Stroman and Aaron Sanchez left rookie manager Charlie Montoyo scrambling to replace those innings. Montoyo regularly used an opener and had a club-record 21 different starters take the mound over the season.

Outfielder Randal Grichuk, who hit 31 homers and drove in 80 runs, is signed through 2023 and will be a key cog as the team starts to aim higher. First baseman Justin Smoak is a free agent and not expected to return.

Tellez went deep 21 times to pace Toronto's rookies, who led the major leagues with 97 home runs. It was one of several offensive categories where the Blue Jays' freshmen were on top.

Guerrero, who made his debut last April amid an absurd amount of hype, posted solid numbers for a rookie (15 homers, 69 RBIs, .272 BA). Listed at 250 pounds, the third baseman struggled at times with his defence and has worked with the team on a workout plan to get in better shape.

The GM, who was hired in late 2015, will have his work cut out for him over the coming months.

Trades are an option but he may find it difficult to lure free agents given it could be at least a year or two until the team is in position to contend.

"I feel more confident today about our future, about this organization than I do from Day 1," Atkins said. "That has only continued to be on the rise for me. So that's how I view it.

"I feel that this organization is in very good shape."

This report by The Canadian Press was first published Oct. 1, 2019.