TORONTO -- The office of a top cabinet minister within Ontario Premier Doug Ford's government is under scrutiny for allegedly using taxpayer resources to conduct Progressive Conservative party business — raising questions about a possible ethics breach by one of the premier's key allies.

Treasury Board President Peter Bethlenfalvy's government-funded office recently prepared a "social media advertising campaign" to increase the minister's followers and likes on Twitter, Facebook and Instagram, by targeting the followers of "conservative and conservative-leaning accounts."

The plan, developed by the minister's communications team over the course of two months, was prepared on official Treasury Board Secretariat letterhead and aimed to provide "confidential advice to the minister" about paying to increase his social media presence.

Instead of using the Treasury Board budget to pay for the ad blitz, however, staff emailed the document to Bethlenfalvy's riding association in Pickering-Uxbridge for approval and payment using donations made to the PC party.

The social media strategy was circulated among a small group of people involved with the Pickering-Uxbridge riding association — including Bethlenfalvy's personal email address — which was then sent to discuss whether party funds should be spent on the plan.

The email, obtained by CTV News Toronto, clearly shows the riding was prepared to finance the plan. 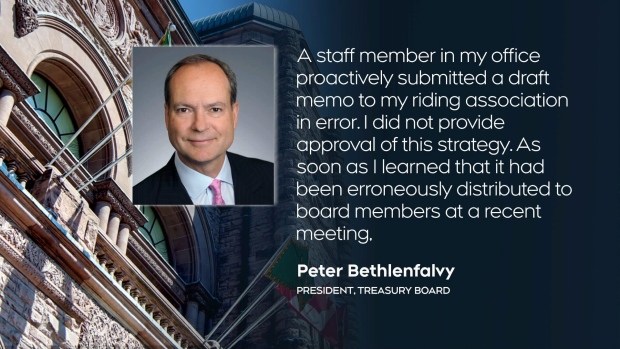 "I will be making a short presentation to the board, followed by a vote. (Hopefully) to allot some funds each month to increase the minister’s social media presence, views and likes,” wrote the riding’s vice-president of communications.

Multiple sources say when the riding association executive met on Jan. 27, Bethlenfalvy was “startled” by the document and immediately recognized that his staff had mixed party and government business. According to these sources, Bethlenfalvy then sought to destroy any copies of the document at the board meeting and have the topic struck from the agenda.

"(Bethlenfalvy) realized very quickly that the memo should have never been shared with the riding association," according to one source present at the meeting who spoke to CTV News Toronto on the condition of anonymity.

"He said 'this is not appropriate. We shouldn’t be talking about this.'"

Hard copies of the document were “torn in half" and thrown in the trash, according to those who were present, while others were later instructed by the riding association to delete the original email containing the digital version.

By expending taxpayer resources to create a document for Bethlenfalvy’s riding association, the minister’s office could be in violation of the Public Service of Ontario Act, which governs ethical conduct of MPPs, ministers and their staff.

The legislation reads a public servant who works in a minister's office shall not do the following:

Bethlenfalvy issued a statement to CTV News Toronto suggesting that the social media strategy was a "draft memo" that was "proactively submitted" to the riding association "in error."

"I did not provide approval of this strategy," Bethlenfalvy said in a statement. "As soon as I learned that it had been erroneously distributed to board members at a recent meeting, I stopped the meeting and took corrective action." "I take this very seriously. And while this draft should never have made its way to a board meeting, I have taken immediate action to ensure it does not happen again."

Duff Conacher, Co-Founder of Democracy Watch says the office of a cabinet minister is designed to service the public at large, rather than those who support any particular party or voter.

"People in ministers offices and ministers themselves are supposed to spending their work time working for all voters in Ontario, not just voters who voted for their party and not just for their party,” Conacher told CTV News Toronto.

NDP MPP Taras Natyshak believes the social media strategy constitutes an “inappropriate use of government resources and ministerial resources” and calls it a “coordinated effort to increase the minister’s profile."

"We need to hear from the minister directly about what his involvement was and what he was aware of his staff doing on his behalf.”

Natyshak is now considering whether to send a letter to Ontario’s integrity commissioner requesting an investigation.

Bethlenfalvy, meanwhile, has already called in the Integrity Commissioner to "provide refresher training" for his staff.

Here is a copy of the "Minister's Social Media Promotional Spend" memo: