More than 1,000 timeshare owners of Carriage Hills Resort in Ore-Medonte, north of Barrie, packed into a huge room at Casino Rama Tuesday night to voice concerns over their timeshare contract.

Scott Harrison of Scarborough has owned a timeshare with the resort for 20 years.

“Right now the value of our property is worthless, so who is going to buy something that is worthless? Who would pay money for that,” Harrison asked.

Cheryl Chaytor of Holland Landing says she also bought into a timeshare 20 years ago and says her annual fees are now almost $1,500 for one week of timeshare ownership. She said some owners have multiple units and they have to pay the annual fees whether they use the timeshare or not.

“Some of them are getting yearly bills for $6,000 and that is a lot of money for anyone," Chaytor said. 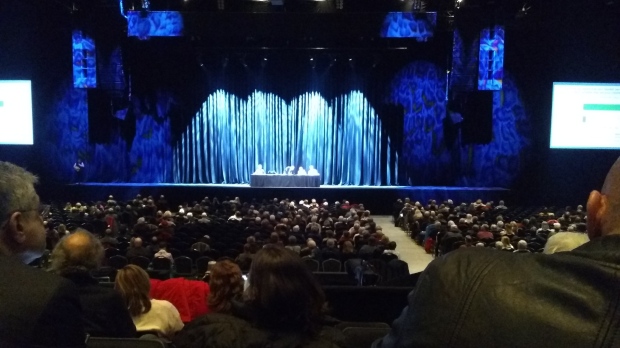 Families are also concerned that the timeshares are deeded properties that will become a burden for other family members who may not want them.

“This is in perpetuity which means we are already having second generations forced to pay these fees and they didn’t sign these contracts, their parents did,” Chaytor said.

Karen Levins of Mississauga said she bought a timeshare in 2002 and is now worried it could be a burden to her family.

“You’re on the hook and when you die it’s automatically transferred to your children and that was really troubling for me,” Levins said.

Laura Boyko of Ajax has had a timeshare at the resort for 21 years. She says many timeshare owners made it clear they want the board of directors to come up with an exit strategy.

“There were cheers and clapping when we were talking about an exit strategy. People want out. Life circumstances have changed for people. Some people in the room were older and are now having to use walkers,” Boyko said.

The President of the Carriage Hills Vacation Owners Association Darren Chapelle told CTV News Toronto that the board of directors has “hired the people we feel are best to find an exit strategy for owners who no longer want to be owners at Carriage Hills.”

“The only exit strategy currently is to sell your timeshare privately.”

Chapelle said the increase in maintenance fees are attributed to 20 per cent of owners not paying their shares, along with day-to-day operations.

A spokesperson for Wyndham Vacation Clubs, which operates the resorts, said that they “believe it is in everyone's best interest to find a long-term solution to ensure the financial viability of the resorts is intact."

“Wyndham wants to continue its management of the Carriage Hills and Carriage Ridge resorts. We’d like to be clear that it is our desire to remain involved with the resorts, and our goal is to provide ongoing support and to maintain our partnership with the Boards of Directors.”

The complaints have also been heard at Queen’s Park. Ontario’s Consumer Minister Lisa Thompson has been inundated with concerns by timeshare owners.

“Fees are going up on an annual basis and they can't get out of their contracts. In the spirit of consumer protection I want to hear more specifics from them,” Thompson said.

The board of directors says it will try to issue a report on a possible exit strategy for timeshare owners in early 2020.