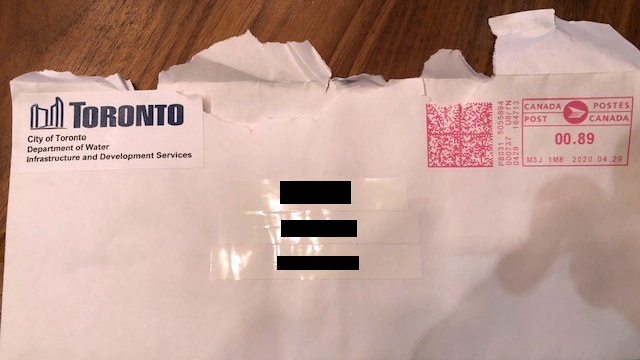 The City of Toronto posted a copy of the scam letter on Twitter to warn residents. (311Toronto/ Twitter)

TORONTO -- The City of Toronto is warning residents about a scam letter regarding the “department of water,” which is being sent in its name.

The city said on Twitter Friday that the letter has an official-looking city logo and falsely claims it is from the infrastructure and development services.

“A letter from false “department of water” about fall 2020 lead pipe replacement resulting in a charge to your utility bill is fraud,” the city said.

Notice of fake letter from #CityofTO. Letter from false “Department of Water” about fall 2020 lead pipe replacement resulting in a charge to your utility bill is fraud. Report it to Toronto Police through non-emergency line at 416-808-2222. pic.twitter.com/hlnlvPdBPP

The fake letter says that the city is carrying out water main replacement work and says the cost of the work is “estimated” at $38,000, half of which will be charged on the resident’s utility bill.

“There will be further correspondence outlining the terms relating to cost in the coming months,” the scam letter stated. “We apologize for the inconvenience.”

If someone receives the letter, the city is asking them to report it to Toronto police through the non-emergency line at 416-808-2222.