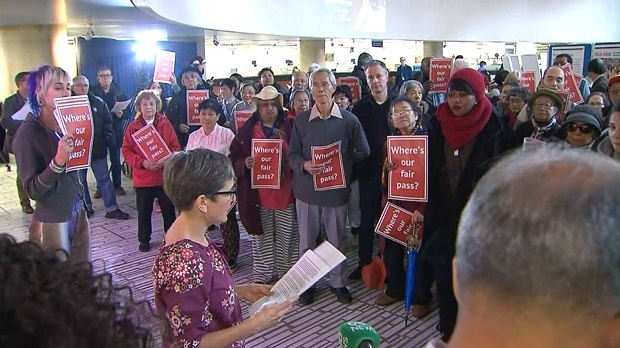 Protesters gathered at city hall to demand lower fares on the TTC for low-income riders on Oct. 26, 2016.

Protesters angry about the lack of progress in lowering TTC fares for low-income riders were at city hall Wednesday.

Some held signs inside the rotunda that read “Where’s our fair pass?” and said they were frustrated after the city continuously pushed back the date for the release of a plan that would provide more affordable public transit for those in need.

“ESL, adult secondary programs do not qualify for the TTC student discount rate. By the way, that discount of $30 is not low enough, wouldn’t make enough of a difference, but even that, our adult learners do not receive,” said one speaker, addressing the crowd. “Because they have come back to school after the loss of a job or to improve their work opportunities in the face of so much precarious employment, it’s probably fair to say that the majority of adult learners in adult education programs are living on a low income. Many are also raising families.”

The TTCriders and the Fair Fare Coalition had worked with the city in 2014. A new plan was supposed to be presented to city council following year.

The plan is now set to be released on Dec. 1.

Some of the suggestions put forward by the Fair Fare Coalition include offering free TTC passes to those receiving Ontario Disability Support Program or Ontario Works benefits and allowing people to ride the TTC for free when the Board of Health issues extreme weather alerts.