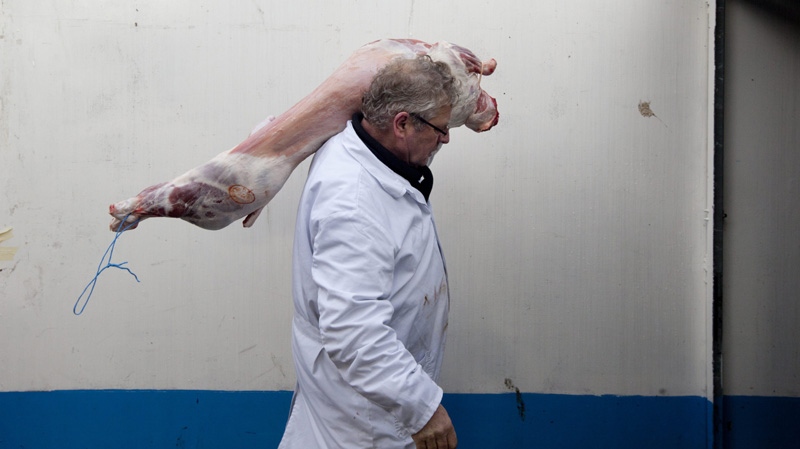 Ritually slaughtered lamb is delivered at a halal butcher shop on the market in The Hague, Netherlands, Tuesday Dec. 13, 2011. (AP Photo/Peter Dejong)

QUEBEC - The Parti Quebecois is sounding the alarm bell over an Islamic food ritual, calling slaughter for halal meat an affront not only to the rights of animals but to the values cherished by Quebecers.

The pro-independence party says it's concerned about halal animal-rights standards, and is worried that mainstream companies are selling the meat, without any labelling, to unsuspecting Quebecois customers. One such company has reportedly conceded to the pratice, calling such labelling "unnecessary."

The opposition party wants a report from the provincial government on the situation by March 23.

It wants to know how many companies are involved in producing halal meat, and how many animals are being slaughtered per year under Islamic rituals.

"This type of slaughter slams directly against Quebecois values," the PQ said in a statement released Wednesday.

The halal flap is the latest iteration of Quebec's identity debates, which have raged on Montreal's populist talk radio in recent days.

Over the last week one radio show has featured complaints about Hassidic Jewish festivals disrupting traffic; Islamic halal meat being sold without labelling; and a convenience-store owner who got angry when asked to speak French.

Halal meat is produced by cutting the throat of an animal and letting it bleed to death. The ritual is preceded by an expression of gratitude to God, and includes other stipulations like not scaring the animal before the slaughter.

The word, "halal," means, "permitted" or "lawful" -- similar to the word "kosher" in the Jewish tradition.

"In Quebec, we made the choice a long time ago to slaughter our animals for consumption by taking steps to desensitize the animals and to slaughter them while minimizing the suffering," said PQ MNA Andre Simard, a veterinarian by training.

"In their great openness, the Quebecois people also accept that, as an exception to the norm, religious communities can proceed with slaughter under certain rituals. But when the exception becomes the rule, there's a problem."