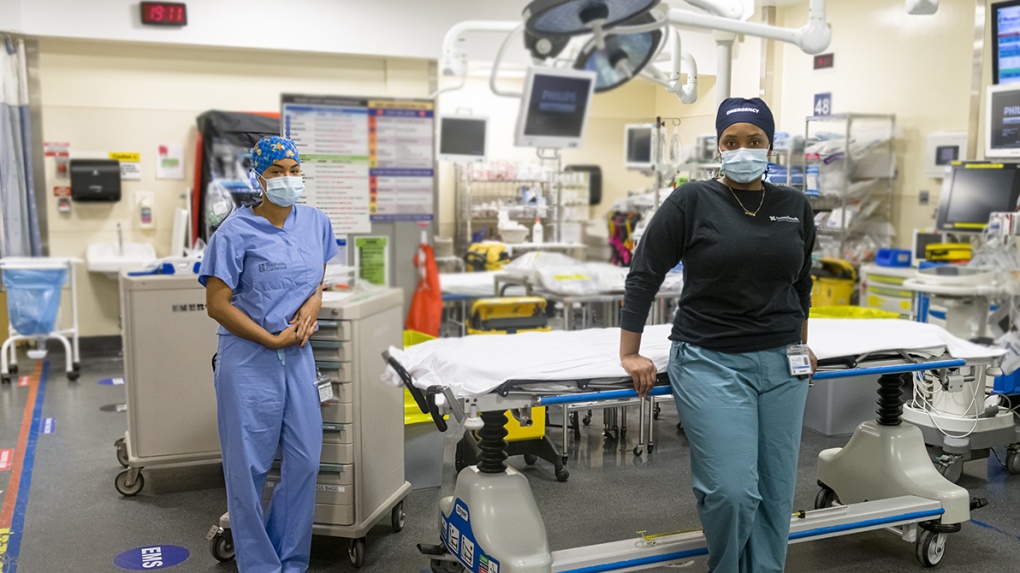 TORONTO -- Hundreds of Ontario emergency room physicians have signed an open letter to Premier Doug Ford demanding that the province increase the pay of critical-care nurses and repeal Bill 124.

The letter, released Monday, claims that emergency departments across the province “are in crisis.”

“This time, it is not an issue of a lack of beds or ventilators. It is because we are losing our acute care nursing colleagues in droves,” the letter reads.

“Several have died, hundreds have become ill with COVID and now nurses are leaving their profession in unprecedented numbers due to burnout, PTSD and the utter disrespect they face from the Ontario government.”

Bill 124, introduced by the Ford Government in 2019, is meant to “ensure that increases in public sector compensation reflect the fiscal situation of the province,” the government says.

The Bill limits regular annual salary increases for nurses to one per cent for each 12-month period.

Nurses across the province say that Bill 124 is interfering with their ability to collectively bargain and acquire the pay increases they feel they deserve.

“Nurses have not received an increase in their salaries on par with inflation for over a decade. This is unacceptable in the context of the sacrifices they have made to care for patients during this pandemic,” the letter continues.

“Nurses’ collective bargaining is limited by the fact that they cannot strike because they are essential workers. They can, however, leave the profession and many are voting with their feet, quitting in unprecedented numbers.”

Statistics Canada data from earlier this year echoes this statement. According to the agency, the health-care and social assistance sectors had more vacancies than any other sector in January 2021.

Additionally, health-care workers reported working more hours in April 2021 than during the first wave of the pandemic in April 2020.

“There are not enough ICU nurses in Ontario and [many] existing, experienced nurses are taking some time off or people are just quitting because of the stress of the pandemic and very, very poor working conditions,” Umaigba said.

“We are taking on more than we can handle because these are our patients, and life-support machines and life-saving medications, so like, you have to.”

Last month, an Ontario union representing over 60,000 front-line health-care workers delivered a seperate letter to Premier Doug Ford, calling on his government to “introduce a universal minimum wage of at least $35 per hour for [registered pratical nurses].”

“A new $35 per hour universal minimum wage for RPNs and the elimination of Bill 124 would begin to address the retention and recruitment crisis facing all sectors of the health system,” SEIU healthcare president Sharleen Stewart wrote.

When reached for comment in response to SEIU’s demands, Ministry of Health (MOH) spokesperson Alexandra Hilkene told CTV News Toronto that the “government is incredibly grateful for the contributions of Ontario’s health care workers and the critical role they have played throughout the COVID-19 pandemic.”

“The government has invested over $52 million to recruit, retain and support over 3,700 more frontline health care workers,” Hilkene said, adding that the MOH “is continuing to provide $4 million annually, as part of $11.2 million annual funding, to the RNAO to administer … grants to nurses for continuing education and professional development.”

Despite these measures, a recent survey put out by the Registered Nurses Association of Ontario (RNAO) claimed that the profession is experiencing “an alarming exodus.”

The survey, conducted between Jan. 29 and Feb. 22, captured responses from more than 2,100 registered nurses, nurse practitioners (NP) and nursing students working in Ontario.

Just over 95 per cent of nurses surveyed said the pandemic has affected their work, with a majority of nurses reporting high stress levels and at least 13 per cent of RNs aged 26-35 reported that they were very likely to leave the profession post-pandemic.

Monday’s letter claims that the “exodus” will put provincial healthcare at risk.

"Nurses want to do their job. But with the ongoing exodus of their colleagues those who remain are saddled with even heavier workloads. They are demoralized that they cannot provide the quality of care that they pride themselves on and that their patients deserve,” the letter says.

“The government must repeal Bill 124. Your healthcare depends on it.”