TORONTO -- A controversial hiring rule that favours supply teachers with the most seniority is being tossed out by the Ontario government.

Education Minister Stephen Lecce announced the scrapping of Regulation 274 on Thursday morning during a news conference held in Vaughan, Ont.

“Moving forward, merit will lead hiring within our schools,” Lecce said. “Teacher hiring now in our schools will be dictated by merit, diversity and the unique needs of schools and communities within our province over seniority.”

“Students perform better when they see themselves presented in the class, including the educator at the front of their classroom – we know this to be true.”

When applying for new long-term and full-time positions, Regulation 274 gave preference to qualified teachers who have been on the province’s supply list the longest.

The plan to revoke Regulation 274 comes as the search for teachers in Ontario has been heightened amid the COVID-19 pandemic.

Students across the province slowly returned to the classroom in September for the first time since a province-wide shutdown was issued in March. Thus far, there have been more than 1,000 lab-confirmed positive cases of COVID-19 in Ontario schools.

On Tuesday, the Toronto District School Board – the largest school board in the country – delayed its deadline for secondary students to switch between in-person and virtual learning.

On Sept. 30, elementary students of the school board were offered their first opportunity to switch between the two learning methods. As a result, about 7,800 students opted for virtual learning, while 4,000 opted to switch to in-person learning.

At the time, the board said about 2,500 remote students still had not been assigned a teacher as they struggle to find enough staff for virtual school.

The school board said additional information on the delay for secondary students would be provided next week.

Speaking on Thursday, Lecce said the issue with hiring more teachers in the province right now is not funding or resources, but the fact that principals cannot hire quickly enough due to “very restrictive elements imposed by Regulation 274.”

“Meaning that when our principals need to hire an educator, they are constrained by an outdated process when they need to get qualified teachers into the class right now,” he said. 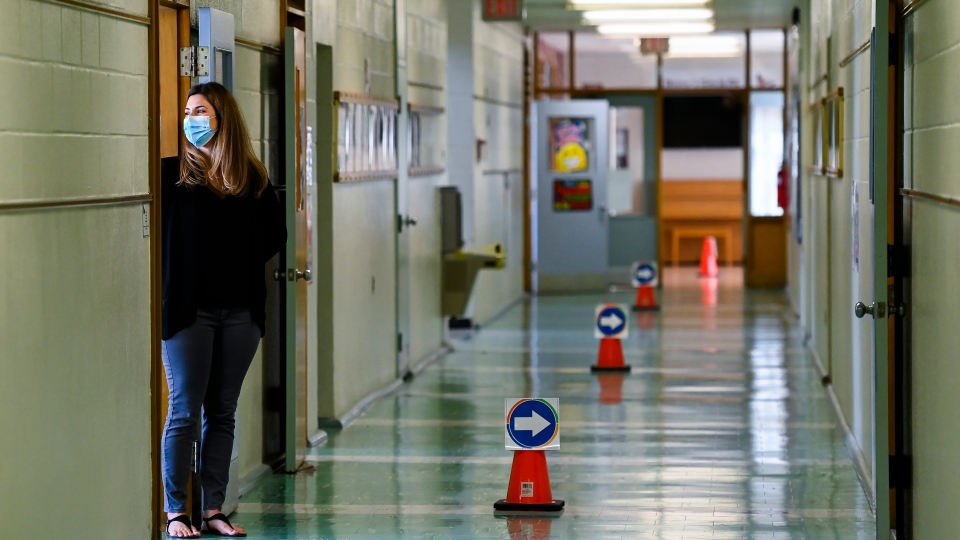 “It’s crucial now more than ever as thousands of educators continue to be hired and to keep our schools safe we need to give our principals the latitude to get it done.”

The “convoluted system that preferred seniority over skills, abilities, diversity and lived experiences of teachers” will be revoked effective Oct. 29, Lecce said.

Upon revocation, Regulation 274 will be replaced by an interim teacher hiring policy as the Ministry of Education works to implement a Policy/Program Memorandum in November that will allow principals to hire teachers through a “fair and transparent process.”

Lecce went on to state that this new process will help new teachers find work after graduating.

“They are bright, they are motivated, they are often tech-savvy and yet they wait five, six, seven, eight years just to be hired,” he said, adding “this is counter to our vision.”

Reaction to the announcement from the province’s education union leaders was as swift as it was blunt.

Harvey Bischof, president of the Ontario Secondary School Teachers’ Federation, said that while nothing is wrong with hiring teachers based on merit, ditching the regulation would lead to preferential treatment during the hiring process.

“Regulation 274 was brought in originally because there was rampant nepotism in the hiring of teachers,” Bischof said speaking to CP24.

“So the best teacher, the one whose experiences best fit the classroom and so forth wasn’t getting hired, rather, it was somebody with a relationship with the person doing the hiring.”

The union leader, who represents some 60,000 members, argued that the announcement serves only as a "distraction" from the province’s highly criticized back-to-school strategy, and that schools would have been better suited to deal with the educator shortage if the ministry had not “squandered” the time between March and September.

“If they came up with a plan that actually provided for safety, provided for social distancing, for smaller classes and so forth, parents wouldn’t have panicked, understandably, at the last minute and pulled their children from face-to-face classrooms into online learning,” he said.

Sam Hammond, president of the Elementary Teachers’ Federation of Ontario, echoed Bischof’s comments, but went further in saying that he was “’dumbfounded” by Thursday’s announcement.

“Why is it that as we are entering the second wave of a global pandemic, when schools are closing and teachers and parents are stretched to the limit, that the minister’s focus and priority is on a hiring practice,” Hammond asked.

Hammond claimed that the regulation has not caused any shortages in the hiring of teachers in the province and that the practice does not stand in the way of diversity.

“At a time when the government should be focused on the safety of students and staff, it is looking to divert attention away from the crisis created in #onted schools,” said @etfopresident. READ THIS https://t.co/VJQNYcyXoF #onpoli #edchat pic.twitter.com/GXpTb3USaO