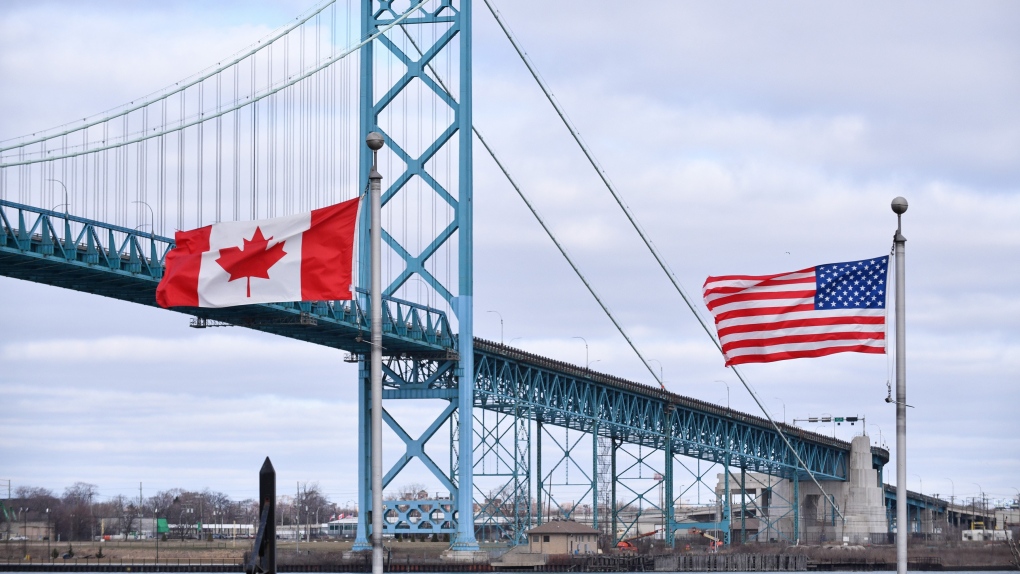 Canadian and American flags fly near the Ambassador Bridge at the Canada-USA border crossing in Windsor, Ont. on Saturday, March 21, 2020. THE CANADIAN PRESS/Rob Gurdebeke

TORONTO -- The Progressive Conservative government says they are disappointed that the United States has imposed tariffs on imports of aluminum products and claims that it will “have a damaging impact on Ontario businesses, workers and consumers.”

U.S. President Donald Trump announced on Thursday that his government plans on imposing a 10-per-cent tariff on Canadian aluminum imports as of Aug. 16. He claimed that Canada has been taking advantage of the United States and that American aluminum business has been “decimated.”

Later in the evening, Ontario Premier Doug Ford and Economic Development Minister Vic Fedeli issued a joint statement saying that the province does about $360 billion in two-way trade with the U.S. every year.

"We are disappointed that the U.S. has re-imposed tariffs on imports of aluminum products from Canada, particularly at a time when our trade partnership will be essential to our economic recovery,” the statement says.

“Last year, Ontario purchased $2.3 billion CAD in aluminum products from the U.S. alone, supporting hundreds of American jobs and businesses. As one of the U.S.' top customers, these tariffs hurt the mutual prosperity and security that has benefitted our two nations for centuries.”

The Ontario government also threw their support behind the federal government, who has since said they intent to impose “dollar-for-dollar countermeasures” in retaliation to the tariffs. The premier and economic development minister went on to say that Trump’s announcement undermined “the benefits of the highly integrated U.S.-Ontario trading relationship” outlined in the new Canada-United States-Mexico Agreement.

“We urge (the federal government) to press the U.S. administration for immediate and permanent removal of its tariffs on Canadian aluminum, and to ensure that no other trade impediments such as quotas are introduced,” the statement reads.

Strengthening our unique trading partnership will only ensure that everyday consumers, workers and businesses can emerge from this period of economic uncertainty in a position of strength."

This isn’t the first time Ford has called out the United States government for imposing tariffs on Canadian goods.

In 2019, while in Washington, D.C., Ford said that the import tariffs hurt workers on both sides of the border.

"When we ship a part, some parts go back and forth across the border eight times," he said at the time. "And every time they go across they're getting dinged."

"To be very frank, it's hurting the U.S. more than it's even hurting Canada.”

The U.S. imposed a 25 per cent tariff on Canadian and Mexican steel and a 10 per cent levy on aluminum in 2018 as the three countries negotiated their new trade agreement.

A year later, an announcement was made saying the tariffs would be lifted.