One suspect charged, another still at large following 2018 Ajax robbery 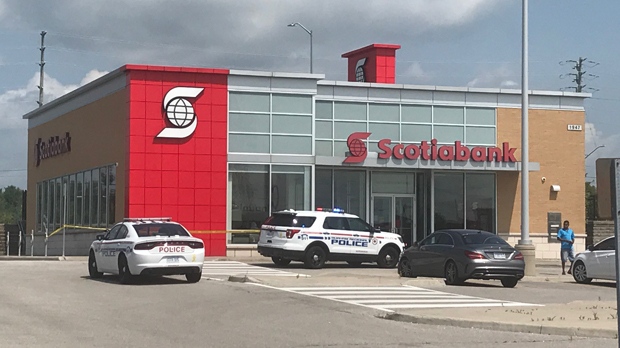 Police are seen at the Scotiabank branch on Ravenscroft Road in Pickering after a robbery on Aug. 9, 2018. (Craig Berry/CTV News Toronto)

Police have charged one suspect and are searching for another in connection with a robbery that took place in in Ajax in August of last year.

Investigators said the incident happened on Aug. 9 at a Scotiabank near Taunton Road West and Westney Road North at about 11:15 a.m..

The two men allegedly made a demand for cash while pointing a handgun at employees. None of the store employees or customers were injured, police said.

Police located Suleiman Omar-Godane, 25, of Mississauga working out of province and made arrangements for him to turn himself in.

On Monday, Omar-Godane surrendered to police at the Central East Division in Oshawa.

Omar-Godane has been charged with robbery with a firearm, using an imitation firearm while committing an offence and disguise with intent.

Omar-Godane was held for a bail hearing, according to police.

Officers are still looking for the second suspect in relation to this incident, police said.

Anyone with information is being asked to contact police directly or anonymously through Crime Stoppers.