One dead, another injured after five-alarm fire at North York apartment building

TORONTO -- One person is dead and another is injured after a five-alarm fire broke out at a North York apartment building Friday night.

During the course of @Toronto_Fire and OFMEM fire investigation operations, one deceased person has been located on an 8th floor balcony of 235 Gosford. Our thoughts and prayers are with the family and those affected by this tragic loss.

“Some secondary searches were conducted and investigations, at which point a body was located on one of the balconies,” Bovata said Saturday morning.

Police had originally described the death as suspicious.

"We called it suspicious because anytime somebody dies and we are not fully aware of the circumstances, by under which the person did die, we have to conduct an investigation to make sure that there was nothing criminal involved,"  Toronto police Inst. Jim Gotell said, speaking to CTV News Toronto.

"At this point in time, I have nothing that leads me to believe that there's anything criminal, however, the investigation is still in its preliminary stages and that might change."

Police have not released information on the deceased.

Crews were called to the 15-storey building at 235 Gosford Boulevard. around 5:30 p.m. Friday.

Firefighters said the fire broke out on the seventh floor of the building before spreading to other floors.

Six people were assessed by paramedics at the scene and one person was transported to hospital in serious condition. That person’s condition has since improved to stable.

Speaking to reporters Saturday afternoon, Toronto Fire Chief Mathew Pegg said he was frustrated that conditions prevented firefighters from getting to victims sooner.

"The fact that we weren't able to get in and complete the primary search is some of the most challenging and frustrating circumstances our firefighers will face, because, we put people into significant harm, we actually deploy them into very challenging, very dangerous circumstances to complete those searches."

They will and they did last night assume very considerable amounts of risk to affect the search and rescue. Unfortunately, specific to suite 808 and the suite of origin and a couple in the vicinity, the conditions were just such that there was physically no way for us to get in and complete that search.” 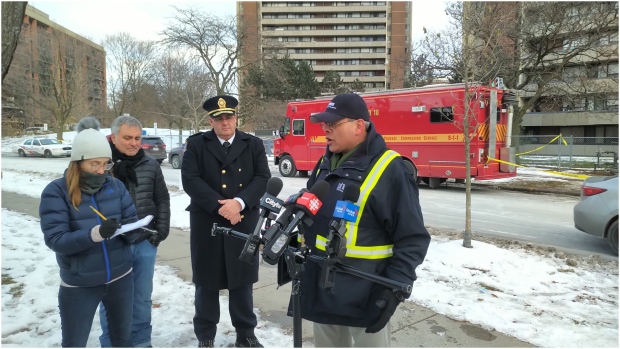 As a result, the building which houses some 600 tenants has been evacuated, police said. It is unclear when residents will be able to return home.

The Red Cross has opened up a shelter at the nearby Driftwood Community Centre, at the request of the city. The Red Cross said they will be providing lodging and shelter to residents displaced by the fire.

The city's Office of Emergency Director Charles Jansen said that 100 residents have registered in the centre as of Saturday evening.

“We are encouraging any residents out there to look towards family and friends first and foremost, if they have an opportunity. But if they don't, certainly register at the Driftwood Recreation Facility so that we have their name and their information and what their needs are,” Jansen said.

Jansen said inspections have to be completed to determine when the residents could be allowed back into the building.

With files from CP24's Bryann Aguilar.