Data obtained from the Ministry of Transportation by CTV Toronto's Paul Bliss showed that the government conducted 690 winter investigations between 2012-13 and 2014-15.

In 302 of those cases, investigators found that private contractors had failed to maintain the roads as defined in their provincial contracts.

The investigations, or unplanned audits, are conducted by the ministry as a result of complaints, collisions, previous audits or observations from officials, MTO told CTV Toronto.

The audits are focused on specific areas of the ministry's contracts, like salting the roads or plowing snow, and are not representative of the contractors’ ongoing performance, MTO spokesperson Bob Nichols said.

If a contractor is found to have failed to comply with part of its contract with the government, the company can face hefty fines.

The ministry provided CTV Toronto with data on fines issued to the private companies responsible for summer and winter maintenance between 2010 and 2015.

The data showed that road maintenance contractors have been fined more than $47 million by the Ontario government over the past five years for failure to provide services.

Nichols told CTV Toronto that some of the fines may have been reduced or waived by the government.

Fines can be changed "when substantial data has been presented to demonstrate contract compliance or commitment to internally invest in additional resources takes place," he said.

Alternately, if a contractor can prove that they were unable to meet their contract requirements due to "factors outside of their control," like road closures, the evidence can impact the initial fine.

Transportation Minister Steven Del Duca told CTV on Thursday that the process of collecting fines is something the government is trying to streamline.

"In some cases, it has dragged on for quite some time, and I think we need resolution," Del Duca said.

Although the documents showed more than 300 cases of road maintenance failures, Ontario Premier Kathleen Wynne said Ontario has some of the safest roads in North America.

"That's my primary concern, that we have the highest standards and that people are safe on roads all across the province," she said.

Which areas have been audited the most?

Data provided by the ministry showed that, of the 93 unplanned investigations conducted in the winter of 2012-13, 40 of the assessments occurred in the North Bay area. That year, another 19 were conducted in New Liskeard, and 17 were done in Ottawa. 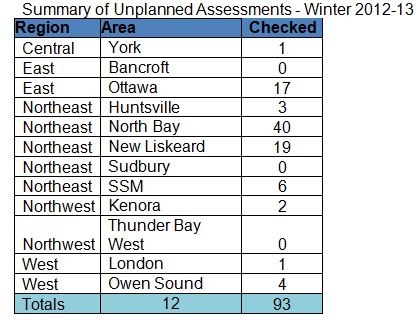 The following year, the regions with the most assessments were Kenora, Owen Sound, Kingston West and Sault Ste. Marie. 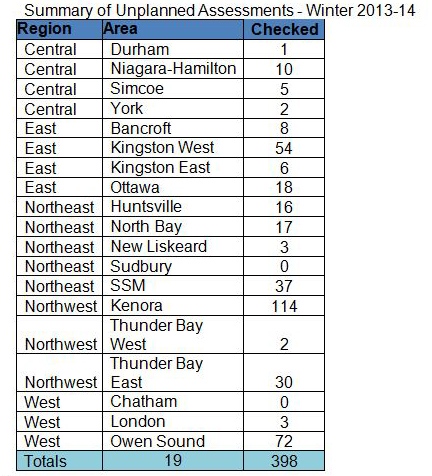 Last winter, North Bay had 39 assessments, while Owen Sound had 23. Kenora, Huntsville, Brancroft, Thunder Bay East, London and Simcoe all had between 10 and 20 assessments 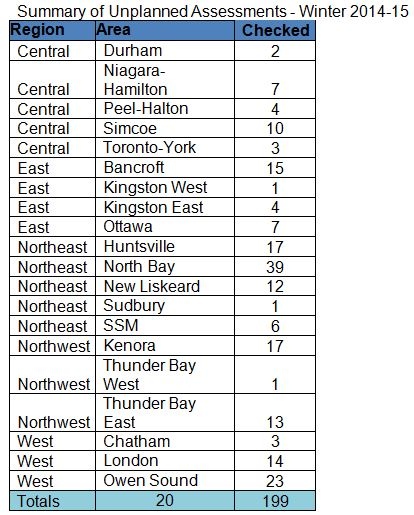 The ministry is working on several solutions meant to improve winter road maintenance and the reporting process.

"We've made adjustments taking into account that we need to do better, and we are, in what we've seen so far this winter season," the minister said.

The ministry is taking the following steps:

Viewing this article on the CTVNewsGO app? Click here for the full experience.