Fans in Leafs Nation are looking ahead to a long playoff run next spring now that the Toronto Maple Leafs and Mitch Marner have agreed on a new contract for the star forward.

On Friday the team announced it had signed Marner to a new six-year deal, paying him, on average, just under 11-million dollars a season. 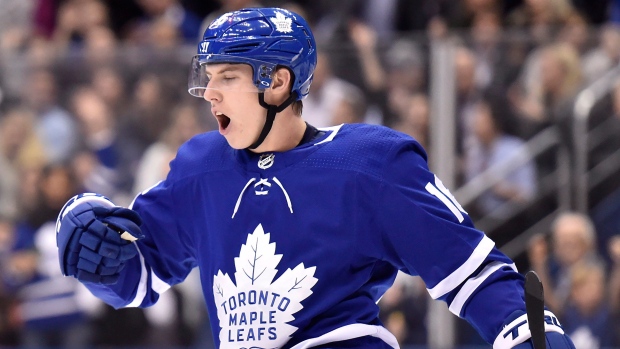 But with the Leafs having four players (Auston Matthews, John Tavares, William Nylander & Marner) signed to massive contracts, fans believe this may be the best chance they have to win it all.

“I hate to say it, but it’s almost boom or bust this year,” Devon Lansdeol said, while he was shopping for team gear at Real Sports Apparel inside Scotiabank Arena with his seven year old son Damon today.

Lansdeol has been watching the negotiations closely, and while he’s pleased to see Marner coming back, he’s worried about what the salary cap restrictions will mean to the team going forward.

“It’s going to be tough with Matthews, Marner, Nylander and Tavares to have core pieces around them when they’re signing for that high.”

Other fans browsing for Leafs branded items were relieved this didn’t drag into the season like it did with William Nylander last year.

Owen Cain was dropping off his Nylander jersey at Real Sports today to get the players new number 88 stitched on it.

“I’m pretty happy it’s over. To be honest I think it’s a bit of an overpayment. But we’re looking to make a cup run this year, so you’ve got to get it done, if that’s what it costs, then so be it,” he said, speaking to CTV News Toronto.

In Newfoundland, where the team is holding training camp this year, Marner and the Leafs’ general manager Kyle Dubas faced reporters for the first time since the deal with signed.

Right away, Dubas was asked what took so long. “These things take time, and we’re just happy to be here,” he said, laughing. “We’ve missed no games, and that’s really the objective. We had a situation last year that did take long.” 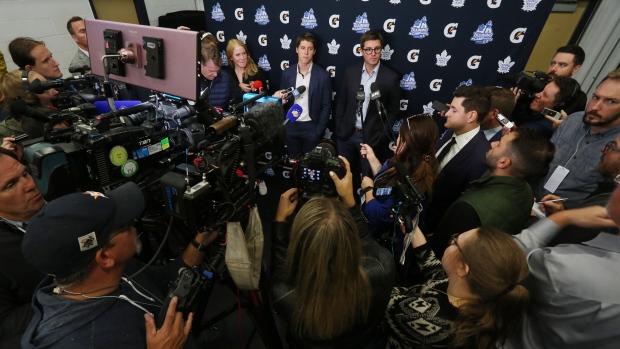 Marner was smiling as he stood next to his GM, saying he was happy the deal was done, and that he wouldn’t be missing any regular season games.

He told reporters that he was able to tell his teammates the news after the rumours started swirling Thursday. “That’s when I kind of broke the news to all of them that I’ll see them tomorrow, and I think it was just excitement on both levels,” Marner said.

I’m exactly where I want to be, in front of the greatest hockey fans in the world, proudly continuing the tradition with the @MapleLeafs. See you soon.

Marner will hit the ice for the first time at training camp on Sunday. The regular season gets underway on October 2, in Toronto.