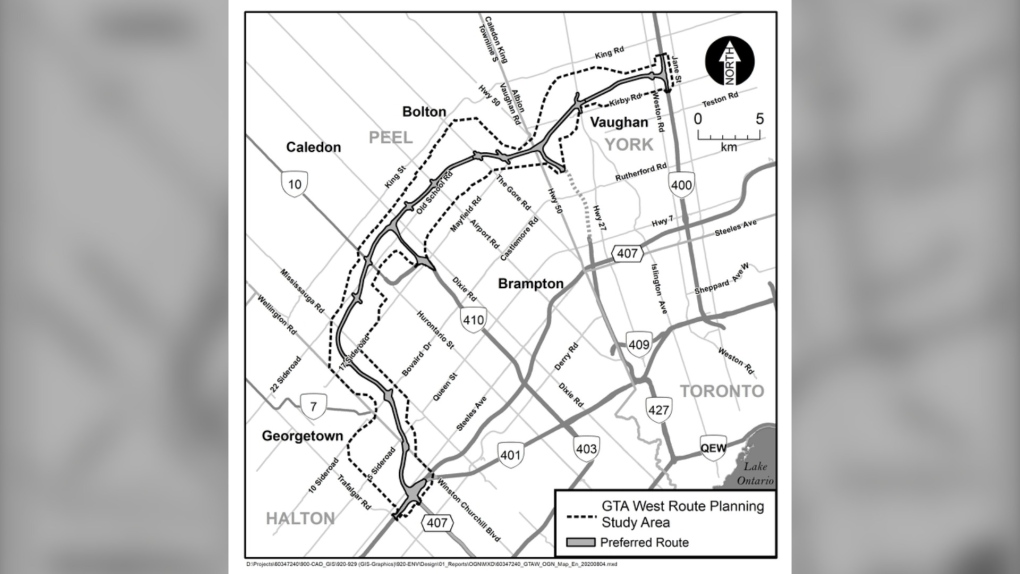 The proposed route of Highway 413 is shown. (Ontario Ministry of Transportation)

TORONTO -- Mississauga city council has unanimously passed a motion opposing the construction of a new 400-series highway with Mayor Bonnie Crombie warning that the project “will have a disastrous impact on the environment.”

Highway 413 would span 52 kilometres, travelling through Halton Hills, Brampton and Vaughan before eventually connecting with Highway 400.

The project was first proposed in 2005 but it was cancelled by then Premier Kathleen Wynne’s government in 2018, only to later be revived under Premier Doug Ford’s Progressive Conservative government.

The motion adopted by Mississauga council during a meeting on Wednesday warns that the highway, if built, will cut through “agricultural, natural heritage and environmentally sensitive lands,” wiping out the equivalent of 13.6 functioning farms.

The motion also says that the highway will put “tens of thousands of jobs and billions in agriculture-related economic activity at risk.”

“The proposed GTA West Highway will have a disastrous impact on the environment, encourage residential sprawl and increase our dependence on cars,” Crombie said in a statement issued following the vote. “As a council, we’ve been so dedicated to trying to combat these issues, so we could not longer simply stand idle.”

The municipalities of Halton Hills and Orangeville have already passed similar motions opposing the construction of Hwy. 413 and a number of other environmental groups have also been outspoken in calling for the project’s cancellation.

The leaders of the NDP, the Green party and the Liberal party have also said that they would not proceed with the project if elected.

“It has become even more clear that this proposed highway would have a catastrophic impact on the Greenbelt, prime agricultural land and our natural habitat,” “Liberal Leader Steven Del Duca said in a statement issued earlier this month.”(We) would instead invest the billions of dollars earmarked for it in regional transit priorities.”

While many municipalities have opposed the project, a number of others, including York Region, have offered their support.

Supporters of the project have also said that the $6 billion highway would reduce gridlock on Highway 401.

The motion passed by Mississauga council on Wednesday opposes “any and all advanced construction” associated with the project and calls for a federal environmental assessment to be conducted.

It also expresses “strong opposition in principle to construction of any transportation corridor traversing the Region of Peel, but specifically the currently proposed GTA West 413 highway.”