Man drowns after falling into water near Toronto’s Harbourfront

TORONTO -- A man is dead after drowning in Lake Ontario near Toronto’s Harbourfront area on Saturday morning, police say.

At around 8:18 a.m, police responded to reports of someone drowning at Queens Quay West and Lower Simcoe Street.

A man reportedly fell into the water and was in distress.

A woman jumped in to assist him, police said.

The man was holding onto a life ring but was pulled under the dock, according to police.

The marine unit was able to recover both the man and woman.

“Toronto marine was able to get him to shore. He was there, vital signs were absent. Toronto medics performed life-saving measures and he was transported to hospital,” Const. Ed Parks told CP24 Saturday morning.

The man was pronounced deceased in hospital, police said. 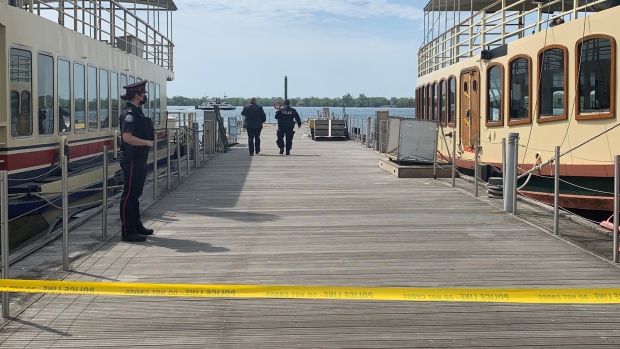 According to police, the man was under water for approximately 30 minutes before being pulled out.

It is unknown what the individuals were doing before the incident.

A resident who lives in the area told CP24 that he saw paramedics give the man CPR before he was rushed to hospital.

"They put him on a gurney and all the way going to the ambulance and they still tried CPR on him. He might have been alive going to the hospital but he probably got hypothermia at some point, that's my guess. She [the woman involved] looked traumatized, totally traumatized," Martin Betcherman said.

Parks is reminding residents to stay safe whenever they're swimming or enjoying water activities.