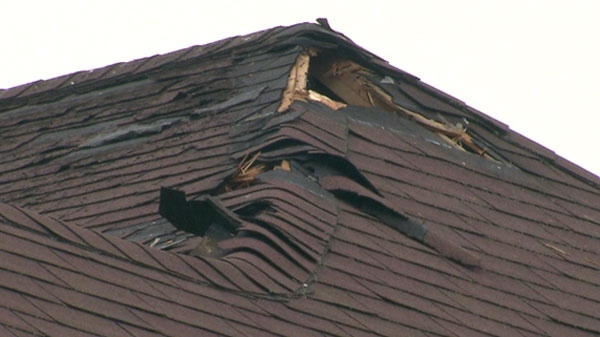 A damaged roof is seen after a lightning bolt struck the roof this Ajax, Ont., house during the thunderstorms on Monday, May 23, 2011.

An Ajax homeowner is dealing with nature's wrath after a lightning bolt struck the roof of his house when thunderstorms rolled through the GTA on Monday.

Dane Clark had only taken possession of the house a week ago and had been doing some renovations before moving in. No one was inside when the lightening struck.

"It was sort of a blessing in disguise," he told CTV. "This was the only vacant house on the street. It was a long weekend, everybody's home, and could have been a lot of worse if it hit somebody else."

The electric shock sent shingles flying -- some landing two houses away in a neighbour's swimming pool. The jolt also blew apart boards in the home's roof and ceiling.

Firefighters later searched the house with a thermal camera to make sure there were no hot spots.

Clark does not yet know if the damage will be covered by his insurance.