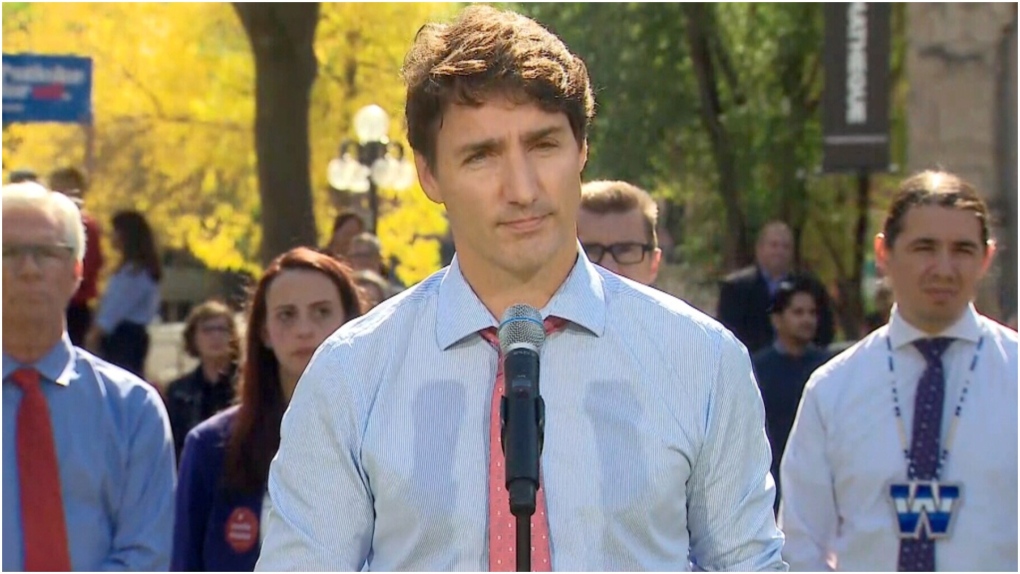 OTTAWA - In the wake of Justin Trudeau’s blackface and brownface controversy, the Liberal leader made a stop in Brampton, Ont. on Sunday to announce a tax break and cuts to cellphone bills.

"Under our plan, middle class Canadians won’t pay taxes on the first $15,000 of income they earn," Trudeau said in his remarks.

In a news release, the Liberals claim the tax break would save the average family $585 a year. The Liberals say they will also increase the Basic Personal Amount tax credit by nearly $2,000 for Canadians earning less than $147,000 a year.

Trudeau also announced his government would lower cellphone bills by 25 per cent, adding this would save Canadian families of four on average $976 per year.

Under the proposed Liberal plan, the government would demand cellphone providers slash fees over the next two years or face more competition in the market, if they can’t meet acceptable targets.

"We know that greater competition will reduce prices and we will utilize the levers we need to use to make sure that families can afford their cellphone bills," Trudeau said.

It’s a promise that’s been similarly echoed by the NDP earlier on in the campaign, when they announced a price cap on cellphone and internet services.

Trudeau was asked on Sunday about how he’s hoping to earn back the trust and support of Canadians following the blackface and brownface controversy.

"I’ve had conversations with friends and colleagues to talk about my actions, to talk about how I move forward, how Canadians move forward and how this country can do a better job of fighting against racism and intolerance all together."

He was also pressed on when he knew it was racist to dress in brownface and blackface and why it’s taken this long for the images to be unearthed.

But Trudeau didn’t provide a direct answer, only saying "I think there are a lot of Canadians who are reflecting on and learning more about the racist history of blackface, and that is something that we are all talking about and I am certainly reflecting on deeply."

Earlier in the day, Conservative Leader Andrew Scheer was asked what the images of the Liberal leader say about how pervasive systemic racism is in Canada.

"We all know people who have experienced it personally and we all see reports that come out from everything from police agencies to advocacy groups, so it is an important issue" Scheer said. "How prevalent it is that Justin Trudeau says one thing and does another – that is very prevalent and that is becoming more evident as this campaign goes on."

On CTV’s Question Period on Sunday, NDP Leader Jagmeet Singh said he wouldn’t rule out working with the Liberals in a minority government scenario, despite the recent events.

In the same interview, Singh confirmed he hasn’t yet met with Trudeau to discuss the brownface and blackface incidents – a meeting that was requested by the Liberal camp. Trudeau has said he wanted to personally meet with Singh to extend an apology.