A Richmond Hill man feels like he was scammed by a contractor who was going door-to-door in his neighbourhood and promised to pave his driveway—but never completed the job.

Dave Hatton told CTV News Toronto there was a knock on his door in early September.

“When I answered, he said he was an asphalt contractor. He said he was doing driveways in the area,” he said.

Hatton said his driveway was older and he was considering having it done at some point, so he agreed to pay the company $2,000. The paver came back the next day and asked for $1,000 and proceeded to rip up the old driveway.

The next day he came back ready to finish the job. Hatton said he was concerned the job was happening too fast and not being done properly.

“I said are you going to put down a base and he said ‘no it doesn't need one.’ After that it was a disaster for my driveway."

As soon as a truck pulled up with a load of asphalt the paver demanded another $1,000 to pay the driver. Hatton said he reluctantly paid the money, but was surprised when the asphalt appeared to be dry, hard and full of large pieces of gravel. He says the portion that was completed is uneven and then the paver ran out of material.

Hatton said that only about three quarters of the driveway was completed.

When Hatton complained, the company promised to come back with new asphalt and finish the entire driveway, however after they left they never came back.

“He said he would remove it and put in a new driveway and I haven't seen him since," said Hatton. 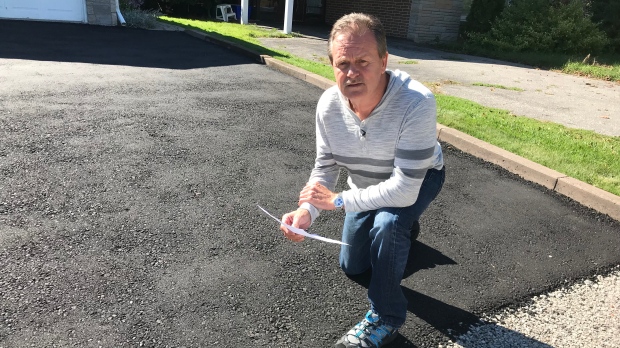 CTV News Toronto called and emailed the paving company, but did not receive a response. The address listed on the company’s contract turned out to be storage units. The storage company said the paver was not one of its clients.

According to Ontario’s' Consumer Ministry, homeowners should beware of contractors going door-to-door claiming to have great deals. Consumers should keep deposits to a minimum and should not pay until work has been completed.

“I realize my mistake and I've learned a lesson,” Hatton said.

He is now out the $2,000 and will have to pay another contractor to rip up the driveway again and pave it properly.