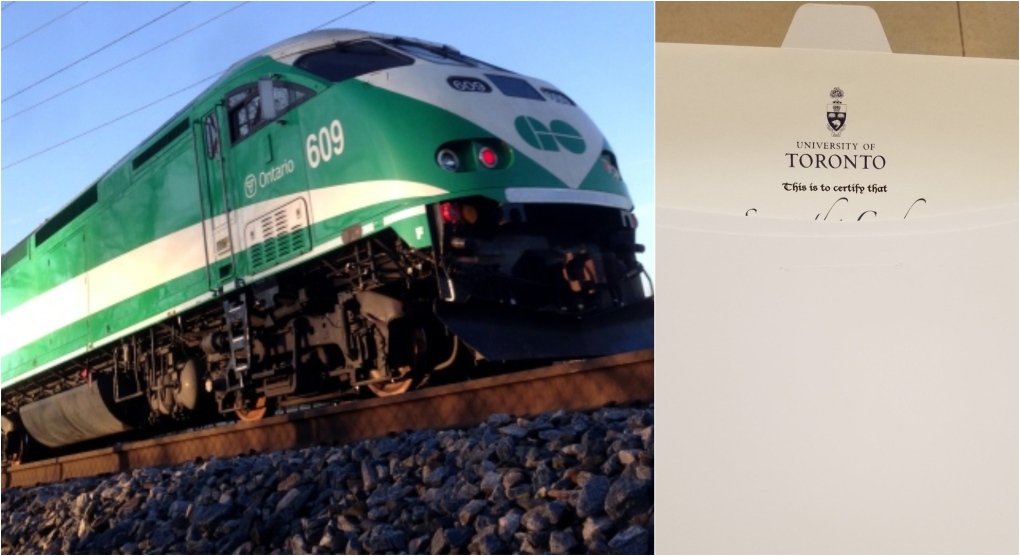 A University of Toronto graduate who mistakenly left her degree on the GO train while heading home from her graduation ceremony will get it back thanks to the good deed of a stranger.

TORONTO -- A University of Toronto graduate who mistakenly left her degree on the GO train while heading home from her graduation ceremony will get it back thanks to the good deed of a stranger.

On Tuesday, Daniel Listi was on the train when he said he noticed a degree was wedged between the seat and window.

The Vaughan resident opened the envelope and noticed the recipient’s name was Samantha.

"If you know Samantha who graduated from @UofT today, retweet to help find her! It'll be with @GOtransit lost and found!" Listi wrote in a tweet.

I found THE Samantha on LinkedIn, messaged her and she messaged back! She had already called the @unionstationTO lost & found just after I dropped it off and she"ll be collecting her lost degree soon!

Listi then reached out to a Samantha on LinkedIn, letting her know he found the degree.

"This is random but I think I have the right person," Lista, who shared the conversation on Twitter, wrote to the woman on LinkedIn.

"Your profile seems to match up with the degree! Didn’t want all those years and money to go to waste, that piece of paper is important. Congratulations on your convocation."

Less than 30 minutes later, Samantha replied to him saying she was in fact the person who lost her degree.

"You found the right person! I was returning home from the ceremony and I had forgotten it on the train," she said.

"I only remembered after the doors already shut."

"Thanks so much for returning it and for the graduation wishes."

The University of Toronto Scarborough Campus said in a tweet that they are "so glad" to hear the degree had been found.

"Thank you so much for going out of your way to make sure it got back to the right person," the university said on Tuesday.

Spokesperson for Metrolinx, Nitish Bissonauth, wrote on Twitter that about 100 items are dropped off each day in the GO Transit Lost and Found office.