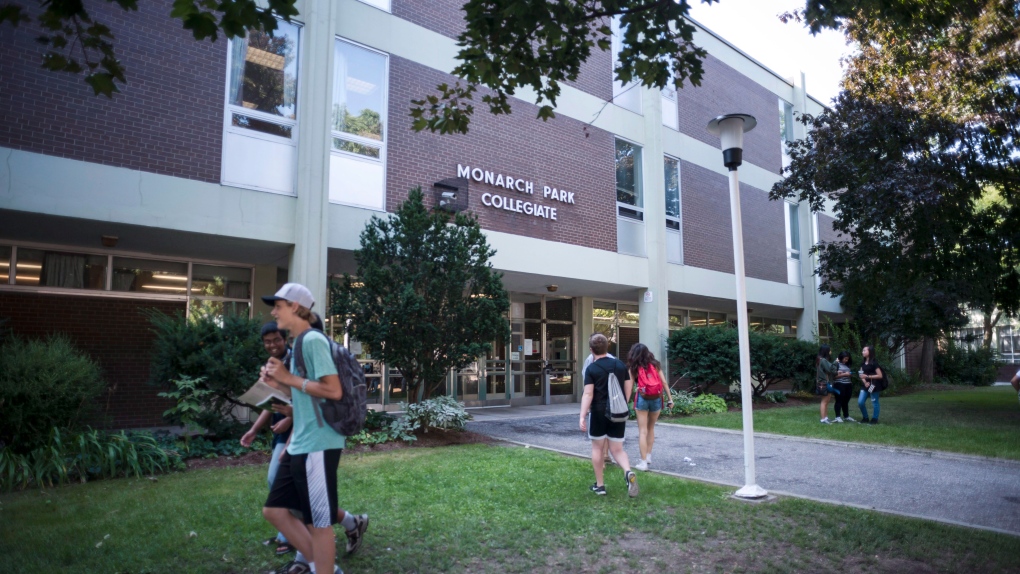 TORONTO -- The former principal of a high school in Toronto is being accused of fostering a culture of anti-Black racism by a number of recent graduates who are asking others to speak up.

The group, Students Standing for Justice, is claiming that principal Cynthia Abernethy “supported and facilitated” racist behavior at Monarch Park Collegiate Institute, while the Toronto District School Board (TDSB) upheld the “systemic oppression” that continues to harm “Black, Indigenous, racialized students, students of the LGBTQ2S, and Muslim community.”

One of the group’s founding members Destiny Mae Abraham said that she was on the receiving end of a number of “micro-aggressions” from Abernethy in the lead up to her senior year in 2017. At that time, Abraham says Abernethy’s anti-Black racism towards the then Grade 12 student, reached its “pinnacle.”

Abraham describes herself as “very vocal” and said she had joined the school’s Afro-Canadian Club in Grade 9. In the years that followed, Abraham worked to become an active member within the school’s “very small Black community” in an effort to raise awareness about the issues facing people of colour. But, as she explains, sometimes those messages were not received well.

“During the 2016 Black History Month assembly, there was a lot of discontent towards me and the Afro-Canadian Club because I had performed a poem that was labeled by my white peers as anti-white.”

As a result of the incident, Abraham says that in 2017, the Afro-Canadian Club was advised that going forward, everything prepared for the school’s annual Black History Month Assembly must be vetted by Abernethy and two other teachers, neither of whom were Black.

Abraham said her next poem was vetted and returned to her, though Abernethy did not offer input at the time. During the dress rehearsal, Abraham said Abernethy wanted to speak with her “privately in her office.”

Abernethy then went through the poem and at one point said the n-word, which was included in the piece, without “hesitation,” according to Abraham.

“She didn’t even think twice about whether or not she should have said it, she just said it,” Abraham recalls.

Abraham said she was then told to “contextualize” her experiences with racism, which she described at the time as a “ridiculous ask.”

In another conversation, Abraham says she was approached by Abernethy and two of the Black teachers involved in the Afro-Canadian Club about her use of the term “angry Black woman” in the poem.

“Do you want your peers to see you as an angry Black woman because that’s the way that you’re acting,” Abraham recalls Abernethy saying.

“And during this conversation, I wasn’t angry at all, and even if I was, that’s completely justified. Actually I was bawling my eyes out because I could not believe that someone who was responsible for me and my wellbeing was being so incredibly violent and dismissive towards myself and the Black teachers that were with me,” Abraham said.

Abraham says she filed a complaint against Abernethy on November 12, 2018 via the TDSB whistleblower platform, but said the issue was never resolved.

“I had a meeting with a TDSB Equity rep in spring of 2019. After this meeting I heard nothing from the TDSB, and found out myself that the TDSB rep I had contacted was no longer working for the TDSB and I had no representative on my case.”

In a statement provided to CTV News Toronto, the TDSB said that they have reached out to Abraham to address her concerns as well as apologize for a “clear breakdown in communication as it relates to her original complaint.”

“We are continuing our investigation into these serious allegations and are actively looking at how such a long period of time elapsed without some sort of resolution,” the statement reads.

The TDSB goes on to say it has recently revised its procedures when dealing with issues of racism, hate and discrimination to include mandatory reporting and transparent communications.

“While policies and procedures alone will not bring about the changes we need for all students, we are committed to doing better,” the board said.

On Monday, a spokesperson for the TDSB told CTV News Toronto that Abernethy will be retiring from her role this summer.

In response to the allegations, Abernethy tells CTV News Toronto that she has always denounced anti-Black racism and all forms of oppression throughout her 30 years in education.

“Educators have a responsibility to educate themselves and our students about anti-Black racism and anti-oppression, and those who have been afforded white privilege need to acknowledge it, as I have,” she said.

“I am willing to cooperate with any formal process, and as such, it would not be appropriate to speak specifically to the allegations at this time.”

Organizers behind Students Standing for Justice say the movement was inspired by similar action taken by students at Notre Dame High School, and following the global protests against anti-Black racism.

The group is described as a “collective of folks that have decided to use this time to speak up, to defend themselves and others against the violence experienced within the TDSB,” according to their website.

Link in our bio. Let’s fight for long overdue change in our school system Edit: The TDSB has remove their tag from this image in an attempt to hid this and save face. #tdsb #RECLAIMOURVOICE

Visitors of the website are encouraged to sign the open letter to Abernethy and the TDSB calling for accountability, as well as submitting their own experiences with racism within the school board. Abraham says she hopes the platform will result in “transformative justice” in Toronto’s education system, which she says is long overdue.

“Not just for myself, but for so many other students that have been silent about her [Abernethy] and about Monarch and about the TDSB for way too long.”

“We all deserve to heal from that violence and we all deserve accountability for ourselves and also for future generations that are going to be entering the TDSB, and the kids that are still in the TDSB, that have to endure this type of violence by people they are supposed to trust.”

The TDSB said that the board’s human rights office has contacted Abraham for additional information in an effort to “better understand what happened” while adding that they are committed to seeing the process through to the end.