TORONTO -- For many of us, it’s hard to remember what the world looked like 100 days ago.

Today, Berit Nordenson reflected on 100 years of life, celebrating her centennial birthday with a sparkle in her eye and a spring in her step, sometimes not found in people half her age.

Five generations of Nordenesons gathered in Etobicoke’s Widdicombe Hill Park Monday afternoon, heaping praise on the woman they refer to as “the rock” of their family.

Born in Norway, amidst the Spanish Flu pandemic, Nordenson settled in Canada in 1957. She quickly took an active role in her local church and credits an unwavering faith in God for her long and healthy life.

“I’m blessed,” Nordenson told CTV News Toronto. “I’ve been going to church since I was three years old and I’m still here, still alive. Maybe I should be in parliament.” 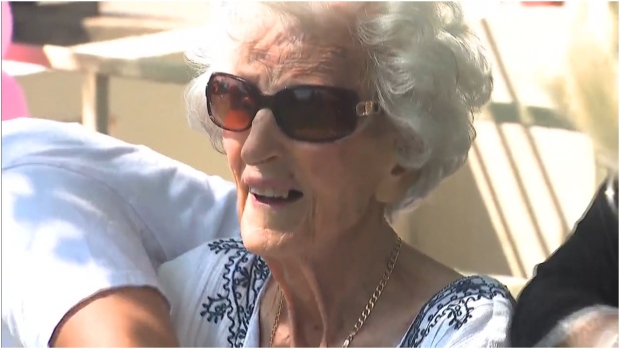 If she decides to go down that road in her second century, she has some serious names backing her. The King and Queen of Norway, along with Mayor John Tory and Premier Doug Ford among those who sent the centenarian well wishes on her milestone.

“She’s had a great life. She was born in the midst of Spanish flu, she survived that. She witnessed horse and buggy, the computer age and world wars,” remarked her son, Kjell Nordenson. “We’ve been looking forward to this since last year. We thought it was going to be a bigger event, we had guests coming in from Switzerland and Norway but events unfolded in the world and changed that. This is just as good.”

As a local fiddler filled the air with traditional Norwegian music, the 100-year-old started dancing, even leaving her walker to greet well-wishers.

“These last few months have been very tough on her, being isolated,” said Lauren Chung of her grandmother. “With this being such a special day we had to do something. You hate to say it, but we don’t know how long we have left with her. So even in the face of COVID we knew we had to come together and do something for her, even with social distancing.”

“God has touched my life. It took me 100 years to look like this. You should all try it!”