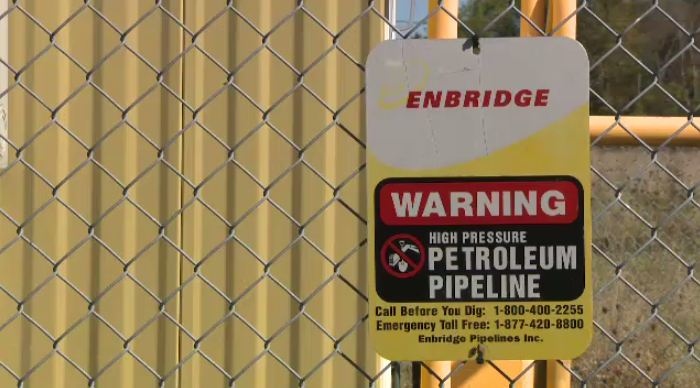 TORONTO -- An Enbridge proposal to reverse the flow of a pipeline that runs between southern Ontario and Montreal puts First Nations communities at risk, threatens water supplies and could endanger vulnerable species in ecologically sensitive areas, a National Energy Board panel heard Wednesday.

The arguments -- put to the three-member panel by representatives of two First Nations and an environmental group -- were among the first of many final submissions being made to the board this week before it makes its decision on Enbridge's Line 9.

The Calgary-based company (TSX:ENB) wants to reverse Line 9 and increase its capacity to move 300,000 barrels of crude oil per day, up from the current 240,000 barrels. It has also asked for permission to move different types of oil, including a heavier form of crude.

"If there ever was a spill it would definitely affect our fishing, our harvesting and all our traditional hunting grounds," Myeengun Henry, a member of the Chippewas of the Thames First Nation said outside the hearing.

His community, along with the Aamjiwnaang First Nation, expressed concerns about Enbridge's reversal project.

"This line is pretty old, close to 40 years old...I don't think the pipeline will be able to control the new substance it's pumping through."

Lawyer Scott Smith, who represented both First Nations that have land near or on top of the pipeline, said the board has a duty to ensure the Crown adequately consults with his clients before making a decision -- a consultation he said hasn't happened.

"My clients' central concerns are that repurposing Line 9 will increase the frequency and size of releases of crude oil following implementation of the project, and that such releases will cause large and more severe health, environmental and socio-economic effects and corresponding infringement of their rights," he told the NEB panel.

Opponents of the Line 9 reversal claim the crude Enbridge wants to transport is more corrosive and will stress the aging infrastructure and increase the chance of a leak.

But Enbridge has said what will flow through the line will not be a raw oilsands product -- although there will be a mix of light crude and processed bitumen.

The change in product was nonetheless of concern to Emily Conger, who represented the Algonquin to Adirondacks Collaborative, a group which aims to preserve a biologically rich area that stretches from Belleville, Ont., to Cornwall, Ont., and up to Alognquin Park.

"If there were a bitumen spill in the A to A region, it could affect the drinking water for people who live there because we have such vulnerable aquifers, it could affect wildlife habitat in this area, which is so key for wildlife movement and climate change mitigation and it could ultimately result in extinctions if it hit vulnerable enough species at risk," she said outside the hearing.

"The main concern we have is the change in product...you put that in an aging pipeline and it looks to me a recipe for disaster."

Conger, who also called Line 9 a "geriatric, quarter-inch-thick pipeline" in her submissions, asked the NEB to compel Enbridge to either entirely upgrade and relay its pipeline in vulnerable regions or make it carry lighter kinds of oil only.

"To Enbridge the risks of Line 9 are acceptable...I don't know if all the integrity digs Enbridge does will ever suitably address the risk of using a badly designed, aging pipeline in such an ecologically important and vulnerable area, carrying such toxic products," she said.

Enbridge, however, has repeatedly said the products a reversed Line 9 would transport would not erode the pipeline.

"The argument that (diluted bitumen) causes corrosion on the interior of pipelines has been debunked by science," spokesman Graham White said outside the hearing, adding that the majority of oil that would be transported on Line 9 would remain a lighter product.

"The destination refineries are light refineries. They don't have the capability to refine significant amounts of heavy oil."

White also explained that the pipeline was constantly monitored for leaks, cracks and any faults, with certain sections being re-coated or reinforced as needed.

"Regardless of whether the reversal goes ahead or not, we conduct our integrity management program as we do with all our lines and our systems," he said.

The City of Toronto, which the pipeline runs through, said it didn't oppose the Line 9 project so long as Enbridge met specific safety and operational considerations, including 13 proposed conditions the city wanted the NEB to consider.

"Our biggest concern is we supply the drinking water for some 3.2 million people in the city and the region around it and we do want to be sure that that water is fully protected against the effects of oil should a leak occur."

Rempe told the board the city was still searching for specific details on just how Enbridge would respond to a spill in a large, congested urban area.

Enbridge says the 831-kilometre-long line is constantly monitored from an Edmonton control centre and can be shut down within 10 minutes if an unexplained reading comes in. A sudden loss of pressure means an automatic shutdown. The line is also patrolled on foot and by air.

If a leak occurs, a team can be on site in up to three hours, but the company is working to improve that by adding an emergency crew in Mississauga, Ont., to deal with problems in the Greater Toronto Area.

At hearings last week in Montreal, Enbridge argued that the Line 9 reversal will redeploy an existing pipeline in a safe, efficient and economical way to the benefit of refineries in Quebec, oil producers in Western Canada "and the broader Canadian public interest."

Unifor, the newly created mega-union that represents the Communications Energy and Paperworkers Union of Canada, said it was in favour of Line 9 because it believed the project will increase Canadian energy security and sustain and create jobs.

Unifor emphasized, however, that its support of the proposal was based primarily on the pipeline being used for domestic refining and not for export. Enbridge has said it has no present plans to make Line 9 an export pipeline.

Line 9 originally shuttled oil from Sarnia, Ont., to Montreal but was reversed in the late 90s in response to market conditions, to pump imported crude westward. Enbridge is now proposing to flow oil back eastward to service refineries in Ontario and Quebec.

A portion of the line has already received approval for reversal and has been sending oil from Sarnia to North Westover, Ont. -- about 30 kilometres northwest of Hamilton -- since August.