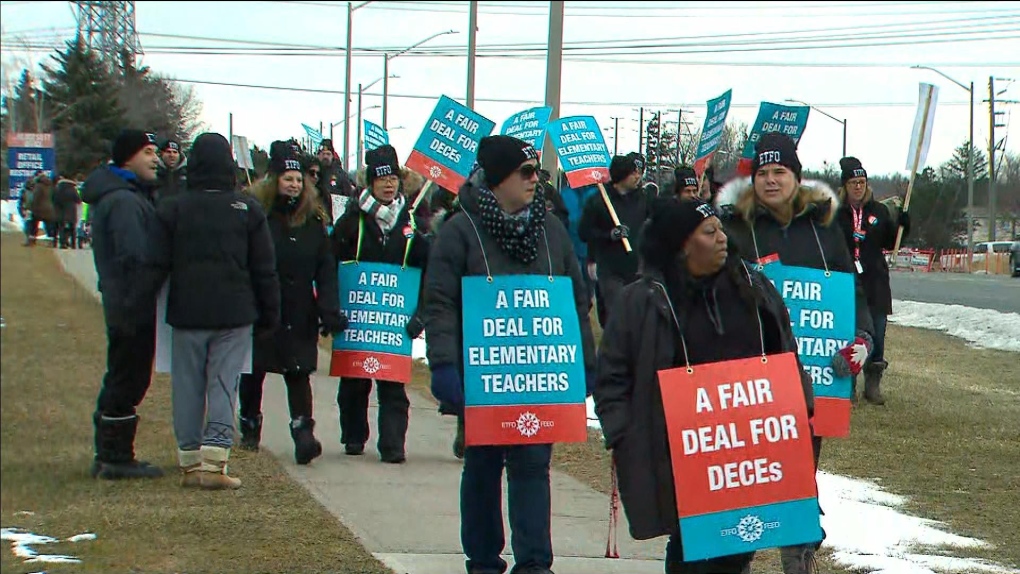 The union representing Ontario’s public school elementary teachers says that they will not hold any rotating strikes over the next two weeks but are ‘putting the government on notice’ of their intent to further escalate their job action after that.

The Elementary Teachers' Federation of Ontario held a press conference on Monday morning to announce the latest phase in their ongoing job action.

The union says that it will not hold any rotating strikes through March 6 and will instead ‘refocus its energies’ on putting pressure on members of the Doug Ford Progressive Conservative government.

They union says that if there is no agreement reached it will nonetheless move forward to the seventh phase of its job action campaign on March 9.

It remains unclear what that might entail, though ETFO President Sam Hammond told reporters on Monday that “everything is on the table,” including a full strike.

“We are putting the government on notice that if there is no agreement over the next two weeks elementary educators across Ontario will without hesitation initiate further strike actions," he said. “I hope I don't have to come back and talk about phase seven. I hope what happens is that we actually get back to the table and that we actually get a deal.”

As part of the latest phase in its job action campaign, ETFO members will be holding a coordinated picket outside of their schools for at least 20 minutes each week.

The work-to-rule campaign that has been ongoing since the end of November will also continue with the added caveat that members will no longer use their own money to pay for classroom and education-related expenses.

Finally, each member of ETFO will be required to send a letter to a MPP and Minister of Education Stephen Lecce “urging them to invest in public education” and participate in “online pickets” on Feb. 28 and March 6 where they will be asked to further promote the importance of investing in public education and provide specific examples of the effect that Ford government cuts will have on the classroom.

ETFO has been holding rotating one-day strikes since mid-January, resulting in schools in dozens of boards across the province being shuttered each week.

Putting that form of job action on hold for now could be interpreted as a positive sign for negotiations with the province, especially in the wake of the union representing catholic board teachers calling off rotating strikes planned for this weekend amid what it characterized as ‘meaningful talks.”

Hammond, however, told reporters that his union has been given no assurances that putting full walkouts on hold will get them any closer to a deal.

“Quite frankly we have no communication with this government, with this minister, nor do any of the other teacher affiliates in the province,” he said.

ETFO is just one of four Ontario teachers’ unions currently engaged in some sort of labour action.

The main issues of contention in all four negotiations have revolved around increases to class sizes and the government’s insistence on limiting any pay increase to one per cent, which is below the rate of inflation.