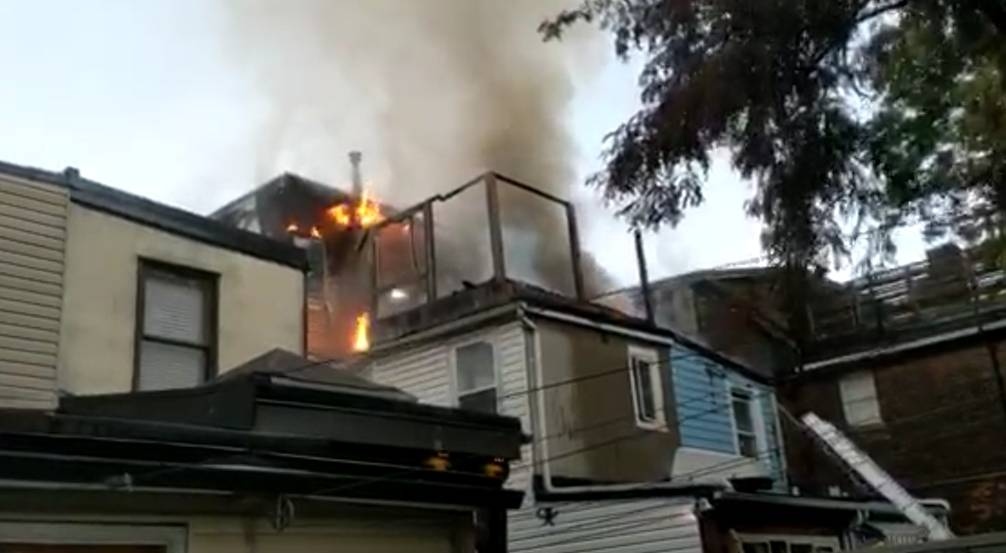 Flames are seen coming from a residence on Major Street on Wednesday morning. (Submitted)

A fire at an Annex home spread to two other neighbouring properties on Wednesday morning, causing hundreds of thousands of dollars in damage.

Toronto Fire says that crews were dispatched to the residence on Major Street near Bloor Street and Spadina Avenue at around 5:30 a.m.

Once they arrived on scene, they were greeted by heavy smoke and immediately began aerial operations to fight the fire.

They say that at one point the flames went through the roof of the home and were also coming through the back wall.

Crews did work to prevent the fire from spreading but there was some minor damage caused to two neighbouring homes.

“There were flames coming out of the back porch area and the deck on the second floor and it was already starting to spread to the exposures so they (firefighters) did a fast attack, getting the aerial (ladders) up and aggressively opening up the attic and applying hose lines to stop the fire from spreading,” Platoon Chief Dan Sells told CP24 at the scene.

No injuries were reported but Sells told CP24 that the blaze is believed to have caused an estimated $500,000 in damage to the homes.

The Office of the Ontario Marshal has been notified and will be attending the scene.

“I asked if they had been doing any barbecuing or smoking in that area but we don’t really have an indication of cause at this time,” Sells told CP24. “Once we get deeper into the debris we will be looking for signs that will take us to the point or origin.”