Brampton, Ont. neighbourhood has COVID-19 positivity rate of 19 per cent

TORONTO -- One neighbourhood in Brampton had a COVID-19 positivity rate that was more than five times the provincial average during the first week of November and another in northwest Toronto wasn't far behind, new data shows.

The Toronto-based research group ICES has released a list of the 30 GTA neighbourhoods with the highest positivity percentage for the week of Nov. 1-7.

The data shows that one small pocket in Brampton that is bounded by Queen Street to the south, Mayfield Road to the north, Highway 50 to the east and Airport Road to the west had a positivity rate of 19 per cent, which was more than five times Ontario’s positivity rate during the same time period (3.7 per cent).

Meanwhile another area in northwest Toronto that is bounded by Lawrence Avenue to the south, Highway 401 to the north, Caledonia Road to the east and Jane Street to the west was not far behind with a positivity rate of 18.7 per cent.

Of the 30 neighbourhoods with the highest positive percentage, 15 were in Toronto, 12 were in Peel Region, two were in York and one was in Halton.

“Once you are above anywhere from three to five per cent positivity in a particular region you are at a very high risk of exponential growth and serious uncontrolled transmission so when you are seeing rates up around 10 or in some places closer to 20 per cent that is a staggering number and suggests that there is a huge problem that is going to lead to serious health consequences and people are going to unfortunately die,” infectious diseases specialist Dr. Abdu Sharkawy, warned during an interview with CP24 on Tuesday afternoon. “I think it obvious that a one-sized fits all approach will not work particularly in these types of communities and we have to provide the resources that are necessary to address this.” 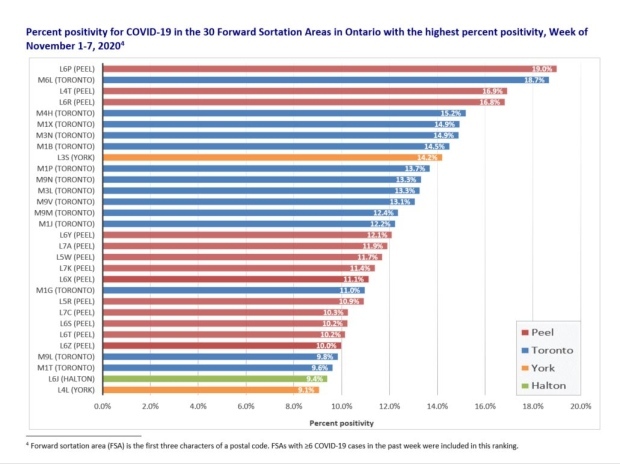 Scientists at ICES used the first three letters of the postal codes of those people who were tested for COVID-19 over a one-week period to provide a snapshot of the parts of the GTA where residents are testing positive at a higher rate.

The data reveals that certain neighbourhoods are experiencing much higher levels of infections than others with many of the hardest-hit neighbourhoods concentrated in Brampton or Toronto’s northwest corner.

“In Ontario the per cent positivity is 3.7 per cent and that is already higher than we would like to see so when you see in Toronto that is like five or six per cent or 10 per cent in Peel that is really high and if you break it down even further into smaller areas you can see that it is really concentrated in certain areas,” Dr. Jeff Kwong, a senior core scientist at ICES, told CP24 on Tuesday morning. “I think we really need to pay more attention to the areas where there is a really high per cent positivity and make sure we support the people who live there.”

All of the areas included in the list released by ICES have a positive percentage of at least 9 per cent and in the five worst ones it was north of 15 per cent.

While the data is based on just one week of tests results and therefor could be skewed by a variation in sample sizes, Peel’s Medical Officer of Health Dr. Lawrence Loh told CTV News Toronto that it does largely “confirm what we have known and understood on the ground for some time” when it comes to the higher infection rates in Brampton.

“There is no doubt that there is a lot of fatigue that is out there and that a lot of people might be flouting the rules and having social gatherings but the true story of Brampton that we have always been speaking to is that these are individuals who work in jobs where they might not be able to work from home and if precautions are not being taken there is a great opportunity for COVID to spread, especially in crowded, large, industrial workplaces,” he said. “Then when people bring the virus home it is not coming to a home of one or two people living in a condo; t is coming to a home with a large family, maybe multiple families and that is essentially leading to significant household spread.”

Loh said that in order to address the “disparity” that exists in Peel, health officials have been meeting with leaders of various cultural communities to figure how they can provide more targeted messaging that really encourages people in those communities to seek out testing when needed and avoid close contact with people outside of their households.

He said that Peel Public Health is also continuing to work with the province to increase the availability of testing in hard-hit neighbourhoods.

“The message is really clear. We need to get our cases under control to protect our hospital and to make sure we keep this out of schools and long-term care homes,” he said.