Boy dies after falling through skylight of Toronto high school

TORONTO -- An 11-year-old boy is dead after he fell through a skylight at a North York school Friday afternoon.

Emergency crews were called to Victoria Park Collegiate, in the area of Victoria Park Avenue and Ellesmere Road, shortly before 5:30 p.m.

Speaking to reporters, Duty Insp. Paul Rinkoff said five youths scaled the southeast side of the school onto the roof of the gymnasium.

Rinkoff said for unknown reasons, one of them fell about 30 feet through one of the skylights.

The other four individuals immediately informed the school staff, who then called 911.

The victim suffered life-threatening injuries and was rushed to a hospital, where he died of his injuries. 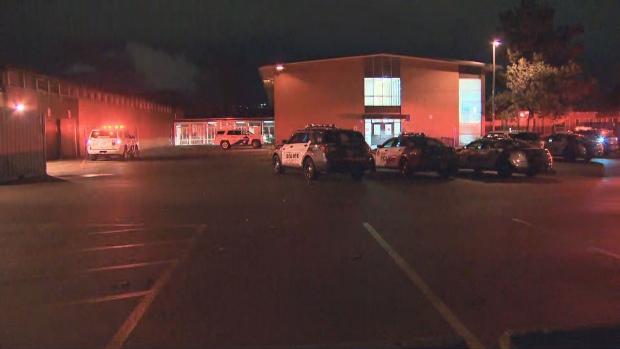 "Our prayers go out to the family and friends of this youth," Rinkoff said.

Police will be interviewing the remaining four youths who were on the roof.

Rinkoff said they don't believe the youths were students of the school.

"It appears from very preliminary investigation that it may be a misadventure. We don't believe there's any signs of any suspicious activity tonight," he said.

When asked about the condition of the skylight, Rinkoff said it will be part of the investigation.

"If you are a parent and you do have a child that lives in the area and may have been at the school tonight, please talk to them and see if they have any information."

Toronto District School Board spokesperson Ryan Bird said the board will be working with police to support their investigation.

"Our thoughts go out to the family of this young person. I can't imagine what they're going through this evening," Bird said.

He believes students and most of the teaching staff would have been gone from the school at the time of the incident.

"I believe it was largely the caretaking staff among others that were in the building at the time," he said.

Bird noted that this is the first time an incident like this happened at the school.

"Our staff, together with others, will be looking at exactly what happened, the state of that skylight, what kind of condition it was in," he said.

"That's all part of that ongoing investigation, not only from the TDSB side, but obviously I know that Toronto police and the Ministry of Labour, among others, will want to look at that as well. That's all part of the information we're trying to gather right now."