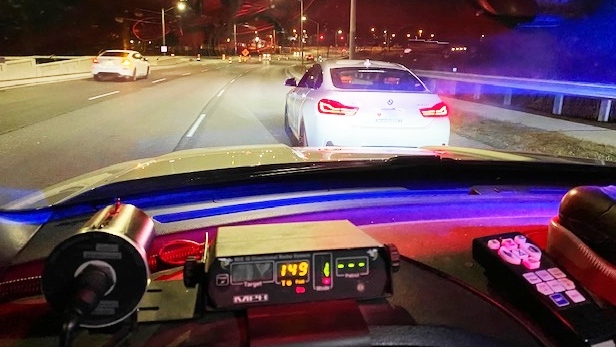 Police released a photo after a driver was allegedly caught speeding in Vaughan on March 24. (Handout)

TORONTO -- A BMW driver caught allegedly going 149 km/h in a 50 km/h zone has prompted police in Ontario to warn motorists that just because the roads are empty does not mean they’ll get away with speeding.

York Regional Police say they have investigated 33 incidents of stunt driving on the roads this month.

A motorist was allegedly caught driving 99 km/h over the 50 km/h speed limit and is now facing a stunt driving charge.

"Just because the roads are relatively empty, don't think you'll get away with speeding," police said in a tweet on Wednesday.

EMPTY ROADS=HIGH SPEEDS - This month we have investigated 32 incidents of stunt driving and last night we caught #33. This driver was clocked at 149km/h in a 50km/h zone.
Just because the roads are relatively empty, don't think you'll get away with speeding. #SpeedKills pic.twitter.com/Mks2lMGWZX

Driving more than 50 km/h over the posted limit is considered stunt driving in Ontario.

Motorists caught stunting driving can face up to a $10,000 fine, an immediate seven-day licence suspension and seven day vehicle impounding.