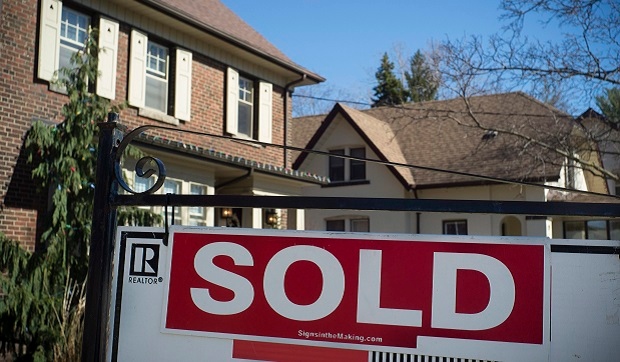 A sold sign is shown in front of west-end Toronto homes Sunday, April 9, 2017. Ontario Premier Kathleen Wynne says her government will introduce a package of housing affordability measures "very soon" that she believes will have a swift impact on the hot Toronto-area housing market. (THE CANADIAN PRESS/Graeme Roy)

The Canada Mortgage and Housing Corp. said Thursday the seasonally adjusted annual rate of housing starts fell to 194,663 units in May, down from 213,498 in April.

Economists had expected the rate to come in at 205,000, according to Thomson Reuters.

Benjamin Reitzes, the Canadian rates and macro strategist at BMO Capital Markets, noted the pace of housing starts in Toronto fell 44.4 per cent compared with April.

"Don't be surprised if activity remains subdued for at least a few more months as the housing market digests the changes," Reitzes wrote in a report.

In April, the Ontario government announced 16 measures as part of an effort to cool the Toronto real estate market, including a tax on foreign buyers and expanded rent controls.

In May, the first full month following the changes, Toronto home sales fell 20.3 per cent compared with a year ago as the number of new listings climbed.

The seasonally adjusted annual rate of rural starts was estimated at 16,145 units.

The six-month moving average of the monthly seasonally adjusted annual rates rose to 214,621 in May compared with 213,435 in April.

TD Bank senior economist Michael Dolega said the apparent cooling-off in Ontario residential construction is likely to be somewhat offset by a stronger pace of homebuilding in recovering markets across Canada.

"Taken together, we expect housing starts in Canada to continue along their current trajectory and settle closer to 200,000 later this year and slightly below that level into 2018," Dolega wrote.

"Toronto's market and its response to the new rules remains a key risk to this outlook, particularly in a rising interest rate environment which could also pressure prices and homebuilding activity in other parts of the country."

In a separate report, Statistics Canada said prices for new homes rose 0.8 per cent in April, led by higher prices in Toronto and Vancouver.