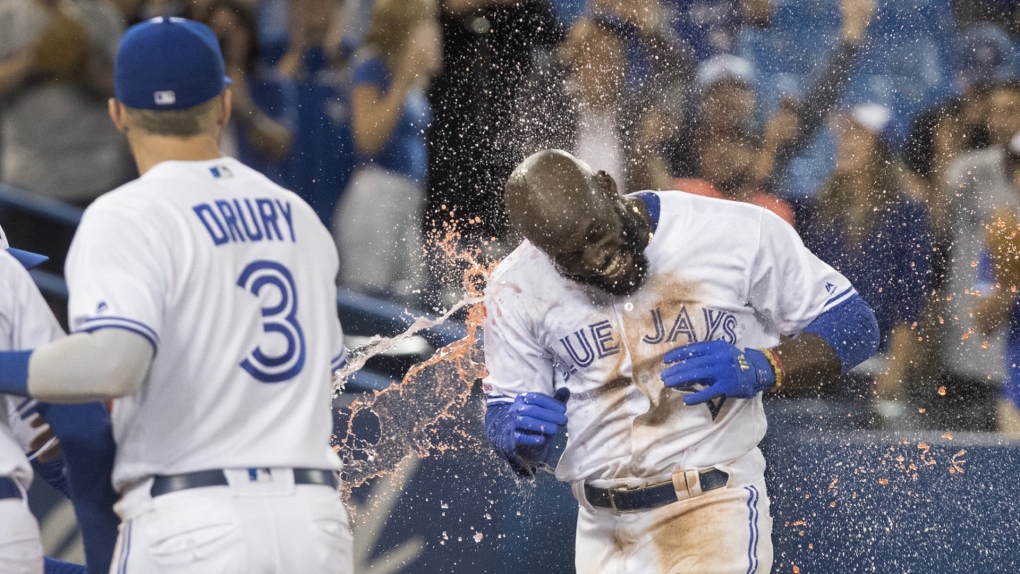 Toronto Blue Jays' Anthony Alford gets a sports drink shower as he arrives at home plate after a walk-off home run to end the 15th inning of American League MLB baseball action against the Baltimore Orioles, in Toronto, Tuesday, Sept. 24, 2019. THE CANADIAN PRESS/Fred Thornhill

TORONTO -- After Anthony Alford hit a walkoff home run in the 15th inning all of his Toronto Blue Jays teammates were grateful. Not just because they had won, but because they could go home.

Alford's solo shot ended the longest Blue Jays game of the 2019 season, an 11-10 victory over the Baltimore Orioles. Monday's game stretched to five hours 21 minutes, nearly an hour longer than Toronto's 6-5 13-inning loss to the Boston Red Sox on May 22.

"Pretty much the whole team thanked me, everybody was ready to get out of here, it's kind of late," said Alford with a smile. "Everybody was pretty excited."

The Blue Jays forced extra innings twice in a game that started at 7:08 p.m. on Monday and ended 29 minutes into Tuesday.

Trailing 9-7 in the bottom of the ninth, Craig Biggio's sacrifice fly drove in Jonathan Davis from third. Randal Grichuk followed with a single that moved Alford -- pinch running for Billy McKinney -- to third.

That brought Vladimir Guerrero Jr., to the plate. The rookie sensation singled up the middle, bouncing the ball between second and short to score Alford and tie it 9-9.

Chris Davis smashed a home run to deep right field in the 12th to give the Orioles a 10-9 lead, but Toronto loaded the bases in the bottom of the inning and Guerrero scored on a sacrifice fly from Jonathan Davis to tie it back up 10-10.

Rogers Centre was largely empty when Alford hit his game-winning homer with most of the announced crowd of 13,193 leaving early. Alford said getting the ball from his first career walkoff home run wasn't exactly a priority.

"I wasn't really worried about the ball, I was just excited to get up out of here," said Alford.

Grichuk opened the scoring in the first inning for Toronto (64-93) with a three-run homer in the first. Brandon Drury, Jonathan Davis, and Biggio also had solo shots.

Austin Hays led Baltimore (51-106) with a three-run home run and a solo homer before hitting an RBI single in the eighth. Rio Ruiz also had home run, a two-run blast in the fifth, while Jonathan Villar had a solo bomb and an RBI single.

Both teams were forced to go deep into their bullpens with the score run so high and the game going so long.

Law gave up two runs in the eighth and Adam was the pitcher of record when Alford -- finally -- put the game away.

Buchholz was happy that Alford was in a position to win the game.

"You want guys on the same team as you that have that heart, that drive," said Buccholz. "Late in the ballgame, everybody knows it's late, there's not a whole lot of people in the stands and you've got to play for you and your team.

"I think that's what he showed: he loves the game, he loves playing, and he's good at it."

Fry allowed a run in his 1/3 of an inning and Armstrong gave up two runs in the ninth. Both were charged with blown saves and Eades (0-1) took the loss.

"You guys are still here? Wow," Blue Jays manager Charlie Montoyo said to reporters when he arrived at his post-game news conference.

Montoyo then went on to explain that he had removed Lourdes Gurriel Jr., from Toronto's lineup before the game because the outfielder had severe stomach pains warming up and would have his appendix removed.

This report by The Canadian Press was first published Sept. 23, 2019.