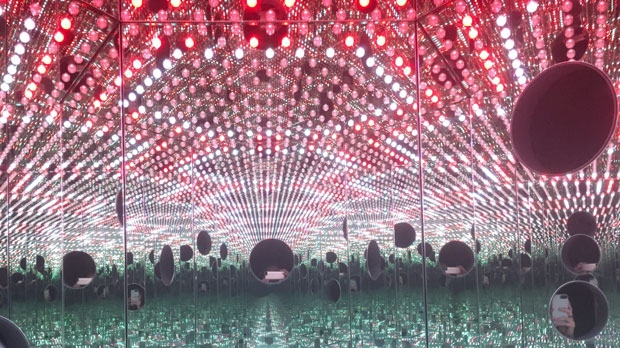 In this Nov. 21, 2017 photo, colored lights appear in the Infinity Mirror Room created by Japanese artist Yayoi Kusama, part of the exhibit, "Yayoi Kusama: Festival of Life," on display at the David Zwirner gallery in the Chelsea section of New York. The exhibit runs through Dec. 16. (AP Photo/Jocelyn Noveck)

TORONTO -- The Art Gallery of Ontario is vowing to have the kinks worked out in time for the next round of ticket sales to its highly anticipated "Infinity Mirrors" exhibit after museum members reported wait times of up to eight hours during a pre-sale earlier this week.

The gallery underestimated the demand for the exhibit by Japanese artist Yayoi Kusama, said Herman Lo, director of visitor experience at the AGO.

"I know it was disappointing for some members who waited a long time online on Tuesday," said Lo, who assured patrons the next round of ticket sales in January will be smoother.

The AGO's website typically gets about 8,000 visitors a day, but saw a combined 60,000 visitors on Tuesday and Wednesday, Lo said.

"Even with all the prep work, what ended up happening was the demand was even beyond what we expected, and we were not able to process the tickets fast enough," Lo said in an interview Thursday.

"Infinity Mirrors" has become a social media sensation with visitors eagerly sharing photos of themselves in the exhibit's mirror-lined rooms, which are filled with colourful lights and vibrant, idiosyncratic shapes that, due to their repeated reflections, appear to go on forever.

The demand for the exhibit is unprecedented at the AGO, according to Lo.

The AGO had allotted 30,000 tickets for the first member pre-sale of "Infinity Mirrors," which runs from March 3 to May 27. Lo said as of Thursday afternoon about 70 per cent had been sold and most of the remaining tickets were for dates near the end of the exhibit's run.

According to Lo, the website can generally process about 1,500 tickets an hour. On Tuesday, the online queue approached 18,000 people, resulting in very long wait times.

Lo said the museum is currently testing its website to strengthen its capacity for the next pre-sale, which starts Jan. 9. The gallery will also be very explicit in its instructions to members, he said. Organizing more ticket releases in smaller batches will also decrease wait times, according to Lo.

Emeraude Mbuku, an AGO member for the last two years, was thrilled when she heard "Infinity Mirrors" was coming to the AGO.

"We don't get all these things in Toronto, and not all of us can afford to travel to go see art," said the 23-year-old documentary media student who tried to buy tickets Tuesday night.

"I just found it frustrating, to say the least," she said. "This is probably the AGO's biggest event, and I feel like they should have been more prepared."

Still hoping to go on her birthday, Mbuku said she'll try again during the next pre-sale and settle for a different date if she has to.

The exhibit itself will also require patience from its audience. There will be a wait time of about 20 minutes to enter each of the six mirrored rooms, and visitors can only stay in the rooms for 20 to 30 seconds. The short visiting times are due to the fact that the rooms are small and can't accommodate more than four people at a time, Lo said.