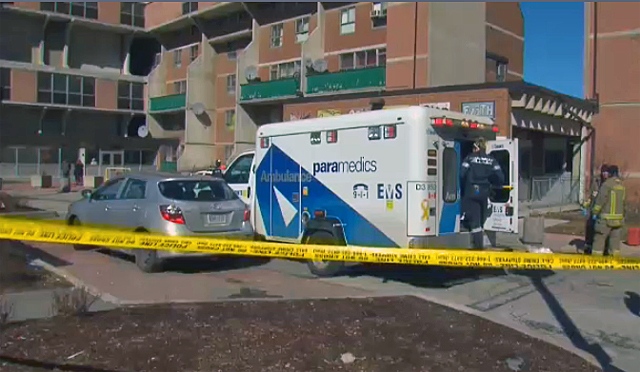 Two men have been rushed to hospital after two separate shootings at the same west-end building on Tuesday.

Police say the man believed to be in his 20s suffered serious but non-life threatening injuries. They say shell casings were found in the stairwell of the building, and paramedics say the man was shot more than once.

"Currently we are trying to piece together the events that led up to the incident that occurred here today," Sgt. John Durbreuil said Tuesday afternoon. He confirmed that multiple gunshots were fired, but did not say where the victim was shot.

The second shooting happened hours later. Toronto Paramedics Services were again called to 2063 Islington Ave., Tuesday night. They say a man suffered multiple gunshot wounds to his arm, leg and possibly head. He was transported to a local trauma centre in life-threatening condition.

Police have not released any suspect information for both shootings.