Mobile meditation brings relaxation to the forefront for health-care workers

TORONTO -- One Toronto health-care centre is trying to bring self-care to the workplace, utilizing a unique new service.

At Providence Healthcare in Scarborough, COVID-19 has left its mark.

"The past few months have been intense" said Jennifer Stewart, the CEO of the Providence Healthcare Foundation. "We've had a few residents in our long-term care home that have been affected by COVID. A few has sadly passed away, but the remaining 10 are mild in their symptoms."

Stewart says there was no spread beyond an initial outbreak due to isolation procedures. The centre's website says 13 residents tested positive at the Cardinal Ambrozic Houses of Providence, and three of the residents died.

For those who work on the frontlines in the battle against COVID-19, it's a daily worry.

"It's been incredibly stressful," said Stacey Connors, an occupational therapist. "I think there's a lot of internal pressure, because you're worried about what you're doing here, but you're also worried about going home."

Stewart says those who care for the sick, may let their own self-care fall by the wayside.

"I think we sometimes work so hard to do our jobs that we forget to take care of ourselves, especially caregivers."

Stewart runs a foundation that has arranged for mid-day meditation sessions for staff. In conjunction with MeditationWorks, on Wednesday they provided 10 to 15 minute social-distanced meditations for any interested employees.

"I think your mental health and your mindset is everything", Traci Shepheard told CTV News Toronto. 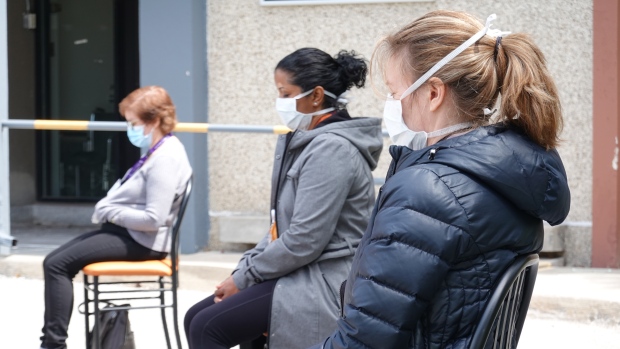 Shepheard is the founder of MeditationWorks, which was set to launch in April before COVID-19 became a factor. The service uses a modified Airstream trailer, converted to have 10 meditation pods inside.

"The experience originally is inside the airstream" Shepheard said. "And obviously with safe and social distancing that wasn't available right now."

Shepheard has literally turned her business inside out. Using speakers she was able to hold the session outdoors and broadcast the meditations to people who were seated, or standing, a distanced apart from each other.

Shepheard also had the meditations transmitted over FM radio for those who get a spot in one of the sessions, or who couldn't leave the hospital.

"It's literally like a drive-in, which is pretty exciting. And the patients that are in isolation or quarantine, or the staff that can't get out, they're tuning in right now." 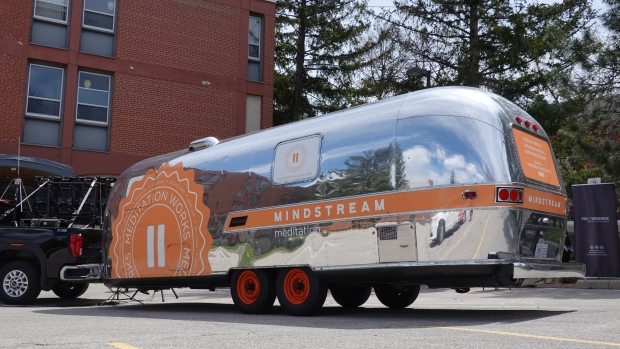 Staff who took part in the sessions admitted that self-care was something they needed to focus more on. Several said they only realized several weeks in to the pandemic that they were spending all of their time looking after others, and not enough time looking after themselves.

Rehab assistant Vanessa King told CTV News Toronto she appreciated the opportunity to take part in the meditation, adding, "it's nice to do it outside as well. It was nice to hear the nature sounds and feel the breeze. It made it feel a little more realistic."

Shepheard says she plans to take the Airstream, which she's dubbed the 'Mindsream' on the road to more health-care centres in the coming weeks to offer health-care workers a brief break, and to give them a chance to engage in self-care, in the midst of caring for others.