TORONTO -- Last January’s emergency alert sent in error about an incident at the Pickering Generating Station sparked a flurry of panicked messages from nearby residents wondering if they should swallow their radiation-blocking iodide pills and a lengthy game of hot potato among energy workers about what happened and who would correct it.

Hundreds of pages of email exchanges from that morning obtained by CTV News Toronto through access to information legislation show mass confusion over who sent the errant alert, which lasted through the morning and involved cabinet ministers and the Secretary of Cabinet.

They also show that Ontario Power Generation (OPG), which owns and operates the Pickering plant, had an internal staff discussion about its own industry-specific alert system, a system it could have used to spread the message about the first alert being an error but one they ultimately chose not to use.

At 7:23 a.m. on January 12, 2020, two employees of the Provincial Emergency Operation Centre sent a message to most cell phones in Ontario, warning those living within 10 kilometres of the plant of an “incident at Pickering Nuclear Generating Station,” where “no abnormal” release of radiation had been reported. 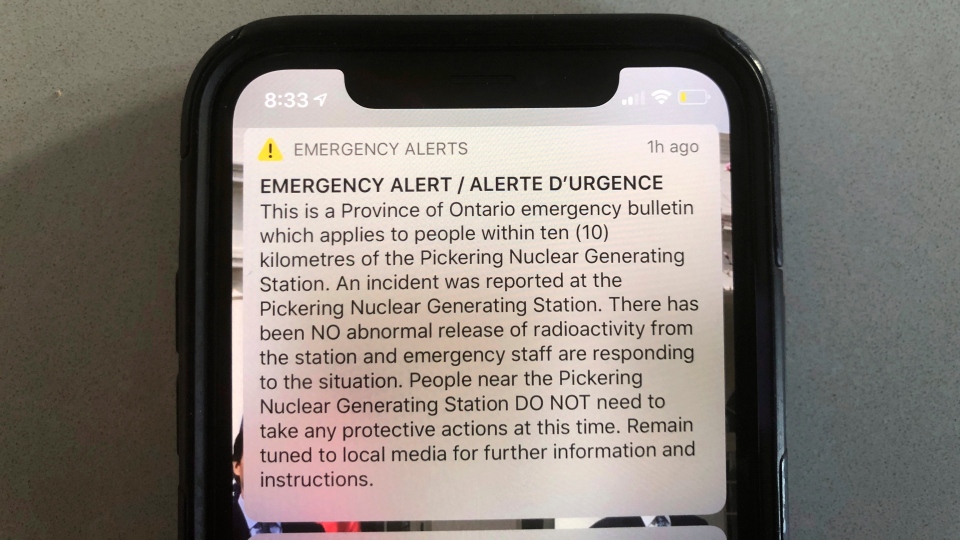 Not only had they sent the alert to nearly every phone in Ontario, they did not know how to retract it.

Nevertheless, police, firefighters and even news crews sped to the Pickering plant.

Meanwhile, frightened people living in the area asked anyone who would listen what they should do.

One person emailed OPG, asking about whether they should see their doctor due to the incident.

“What are the effects of radiation on my family’s health?” the person asked at 7:57 a.m., before anyone outside of government and OPG said it was a false alarm. “Should I be making an appointment to see my doctor (family) or specialist?”

“There was no information available on the Emergency Management of Ontario, OPG or Pickering websites, why is this? As per the alert instructions, I tuned to local media but they had no information.”

CP24 only learned the alert was sent in error from a frustrated Pickering fire chief, who managed to get through to the Provincial Emergency Operations Centre on his own phone and speak to those who made the mistake.

At 8:06 a.m., OPG tweeted that the alert had been sent in error, but that didn’t appear to calm all of the concern from residents.

“Does my family need to take the iodine pills?” a resident emailed OPG. “We live close to the nuclear plant.”

Anyone who lives within 10 kilometres of an Ontario nuclear facility is given the radiation-blocking medication to ingest in case of an emergency. Anyone within 50 kilometres of a nuclear plant can have pills delivered to them upon request.

“Help me I am scared,” another resident said in an email to OPG at 8:28 a.m. that morning.

“How do I get my (potassium iodine) pills and emergency awareness kit?” wrote another at 8:46 a.m. 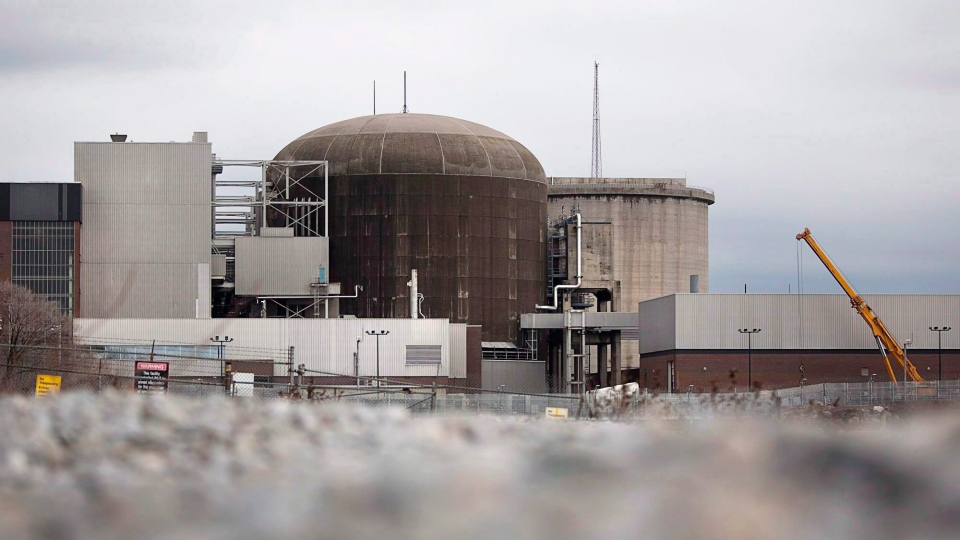 Fourteen minutes before OPG sent the message that the alert was an error, staff within the company were just confirming that nothing had actually gone wrong.

“All units are stable,” a communications manager wrote to her colleagues at OPG. “The Pickering SATS office received a call from the Province this morning saying the Alert Ready was sent in error. I don’t have more details than that.”

At 7:57 a.m., a manager of emergency preparedness at OPG told a larger group of staff that the province was going to send a retraction of some kind, and OPG would craft a broader message about the incident for staff and the public.

“The province is in the process of retracting the alert,” she wrote.

At about the same time, Ontario’s Secretary of Cabinet, the chief civil servant in the province, ordered Energy Ministry staff to find out what had happened,

“Secretary of Cabinet is also looking for info,” an Energy Ministry staffer wrote to OPG. “We need something (as soon as possible,) even if more is to follow.”

Treasury Board Secretary Peter Bethlenfalvy, who represents the riding where the plant is located, was also under pressure to figure out what went wrong.

“We are getting flooded with calls from constituents,” his staff wrote to Ministry of Energy officials working on the response to the incident that morning. “Can you please give me a call and provide further info?”

Meanwhile, throughout the 8 a.m. hour, staff throughout OPG were preparing their own messaging and theorizing about what went wrong, most coming to the conclusion that the province was slowly going to own up to the alert being their mistake.

“Hi, Pickering employees must be on drugs or something, apparently the alarm went out in error,” an unnamed OPG employee said in an email to a colleague at 8:24 a.m. “I hope we hear more and hopefully what we (hear) is ‘true’ and not fabricated to smooth the anxiety of the local people. If it is true a button was pushed in error I trust it will be handled severely.”

Another OPG staffer complained that Provincial Emergency Operations Centre employees caused the problem, but weren’t doing anything to fix it.

“Error by the province, sadly we’re the ones managing the fallout,” the employee wrote in an email to a Hydro One colleague at 8:22 a.m.

Meanwhile a smaller group of OPG staff, after being told the province would issue some form of retraction, mused about using the company’s own internal emergency notification messaging system, known as MIR3, to get word out about the false alarm.

“I was thinking an MIR3 may make people more anxious as we are saying it’s not an event, thoughts?” the colleague replied.

“Send out the Standown one and say it was an error by the province,” the staffer suggests.

“I was told not to use MIR3 by Stan, who was told by higher up. (Emergency Response Organization) communication has been issued, no further communications are to come from us until the province retracts their statement, this is per Randy Lockwood,” the colleague replies, referring to the OPG vice-president in charge of the Pickering Generating Station.

It wasn’t until 9:11 a.m., more than an hour after the MIR3 discussion concluded, that the province sent out a follow-up alert, saying the previous alert was sent in error and there was no incident at Pickering Generating Station.

The alert also sparked media interest from the United States, with CNN, CBS and the Wall Street Journal all inquiring as to what went wrong, emails show.