There’s a new employee at Mississauga Fire and Emergency Services (MFES) that’s hoping to offer a leg up when it comes to mental health and processing trauma—four legs actually.

MFES has added Ajax, a facility dog, to their crew in an effort to reduce anxiety, alleviate fear and encourage first responders to speak openly about their difficult experiences. 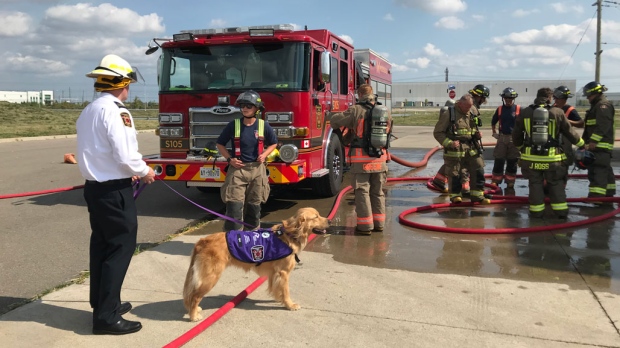 “When you get back to the station after a tough call, and you have a beautiful dog there it just feels relaxing and nice,” firefighter Andrew Thomask said. “It really feels like you're at home.”

The first fully-credited and trained facility dog in Ontario, Ajax is specially trained to promote the improvement of physical, social and emotional ability in first responders. Facility dogs work with a handler who help to direct that emotional support.

“What he does is really break down barriers and we hope the stigma attached to mental health conversations to have people speak freely and openly about what they're going through,” Ajax’s handler Ryan Coburn said.

“When you see him come into the room, you can actually see people's shoulders go down. I believe there is a decreasing in their blood pressure and their heart rate.”

Ajax was donated last month by the National Dog Service and has become a welcome addition at the Gary Modern Training Centre. Mississauga Mayor Bonnie Crombie was on hand for Ajax’s onboarding experience and said he’s already making strides in his new job. 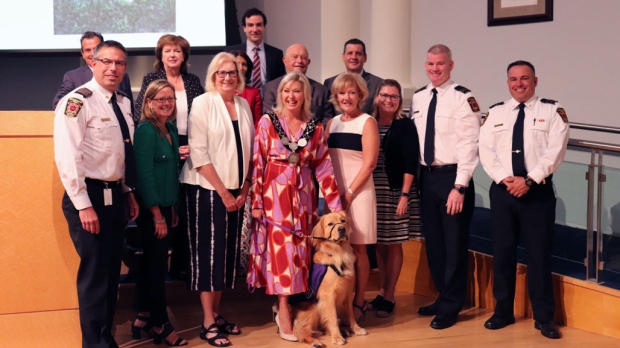 “In the short time that Ajax has been on the job, we’ve already seen his uncanny ability to break barriers and encourage our firefighters to speak more freely about how they are feeling,” Crombie said.

“We’re beyond excited to welcome Ajax to the City of Mississauga family. Our furry friend will provide comfort to our fire team and promote open and honest conversations around mental health,” she added.

Ajax, the golden retriever lab mix, trained for two years before joining the team. When Ajax is not at work, he’ll live with his handler as part of their family.