TORONTO -- Durham Regional Police say they are not ruling out the possibility that a missing 50-year-old woman found critically injured near a Whitby creek earlier this week may have been randomly attacked by a stranger.

Shortly before 10:30 a.m. on Wednesday, officers discovered a female near a creek southeast of Taunton Road East and Anderson Street.

The woman, police say, had suffered multiple serious injuries "consistent with an assault” and she was rushed to a Toronto trauma centre via air ambulance.

Police say the 50-year-old victim, who remains in hospital in critical condition, had been reported missing the night before after going for a walk in the area and she was found after police spent several hours searching the neighbourhood overnight.

In an update on Saturday, Durham police confirmed that officers are continuing to canvass the community to find any possible witnesses along with video surveillance footage from nearby houses and businesses.

"At this point in the investigation, no arrests have been made and efforts continue to determine the nature of the assault and the person responsible," police said in a media release sent out on Saturday morning

"Investigators have not ruled out the possibility of this being a random attack by a stranger." 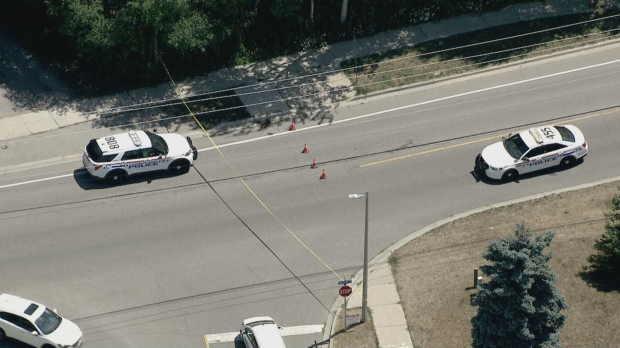 Police say investigators have received "multiple media inquiries" about a possible link to a missing Ontario Shores patient from Oshawa.

"At this time, there is no information that connects him to this incident," the news release read. "His whereabouts are unknown and it is believed he may have left the region."

Speaking to CP24 on Saturday morning, police confirmed that members of the homicide unit have taken over the investigation due to the "unusual" nature of the case.

Police are urging people to "remain vigilant" when it comes to personal safety, encouraging residents to walk or jog with a friend and try to stay on well-lit main streets.

Members of the neighbourhood told CP24 that the incident has shaken the community.

"It's horrifying to think it happened in the middle of the evening, with it still light out. It has definitely shattered our security," one woman said Saturday.

"I have a personal alarm and mace in my Amazon cart now which is just so scary. I haven't been able to buy because I just can't get over the idea that I'm going actually have to do that here in this community."

A man who resides in the area said his wife is so fearful that she won't walk the dog alone at night.

"It kind of hits close to home. You hear about this kind of thing and the worst part about it is there is no suspects," he said. "It's just really perplexing and scary."