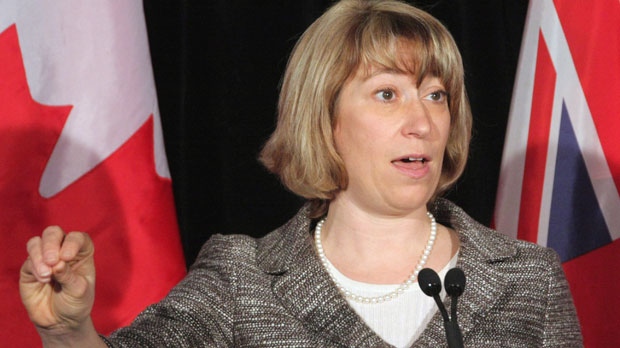 TORONTO -- Ontario isn't rolling the dice on a potential court challenge by foisting new contracts on thousands of teachers, even though it's turned out badly for other cost-cutting provinces, Education Minister Laurel Broten said Tuesday.

The cash-strapped Liberals plan to introduce a bill next week that would impose a deal on tens of thousands of teachers that would rein in wages and cut benefits.

If passed, the government would also be able to ban a strike or lockout for the next two school years.

Two big teachers' unions that continue to resist the government's belt-tightening demands have vowed to fight the legislation in court. But Broten expressed confidence that it would withstand a constitutional challenge.

"If this bill is passed and challenged in court, our position will be that it is constitutional, that we respected the constitutionally protected right to the process of collective bargaining and that in any event under the Charter this bill is reasonable and justified in all circumstances," Broten said.

The government tried to avoid the mistakes that ended up overturning labour legislation in British Columbia, she said.

In 2002, the B.C. Liberals rewrote health-care contracts to allow for widespread contracting out, leading to a 2007 Supreme Court of Canada ruling that struck down sections of the law and forced the government to negotiate a $75-million compensation training package.

But there are "major differences" between Ontario and the B.C. case, she said.

In B.C., the government gave 20 minutes notice to the unions that they were changing the contract and the Supreme Court found that wasn't bargaining in good faith, she said. In Ontario, the government tried to negotiate with unions for six months.

Ontario has also been able to reach agreements with three unions representing about 55,000 teachers and other education workers, she said.

Simply negotiating for a certain period of time doesn't guarantee that the legislation will stand up in court, said Sarah Slinn, a professor of labour law at Osgoode Hall Law School at Toronto's York University.

"The fact that you've simply bargained for six months -- or any period of time -- isn't the case law, although it's in a period of real flux at the moment," she said.

But Ontario is in a good position to argue that its restrictions on collective bargaining rights are justified because the province has severe financial problems, Slinn said.

Any legal action will be risky for both sides because there are only a handful of cases that have looked at this kind of legislation, she said.

Federal wage restraint legislation -- which limits increases for federal employees between 2006 and 2011 -- is still winding its way through the courts.

But none of that will matter if the minority Liberals can't convince one of the opposition parties to help pass the bill. And neither the NDP nor the Progressive Conservatives are singing its praises.

The New Democrats say the legislation goes too far, while the Tories say it doesn't go far enough to eliminate Ontario's $15-billion deficit.

As it did in B.C., this bill will spark a lengthy court battle with the unions that will cost taxpayers millions of dollars in the end, said NDP critic Peter Tabuns.

Just a few months ago, the Liberals warned that an immediate wage freeze -- which the Progressive Conservatives are advocating -- would be thrown out by the courts. Now they've changed their tune, he said.

The Liberals should release documents to prove that they've done their legal homework, Tabuns said.

"They have completely gone 180 degrees from what they said before about legal problems," he said. "Frankly, they need to show Ontarians that they've thought this through."

The Conservatives say they want a second opinion on whether the legislation will save as much money as the Liberals claim.

Constitutional challenges can take years to resolve, Slinn said. But it may be a risk the Ontario Liberals are willing to take.

Broten also suggested that one of the three unions that opposes the government's terms is coming around, but was vague about the details.

The Ontario Secondary School Teachers' Federation is embarking on "local conversations" to find an alternative path to meet the government's tight budget, she said.