Mini snowplows to hit Toronto's narrow streets but some neighbourhoods are left behind, councillor says 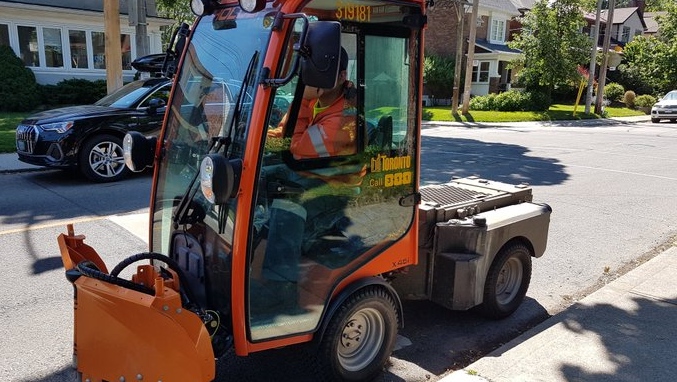 The City of Toronto's new mini snowplow machines will be used this winter to help clear snow in some of the city's narrower sidewalks. (AlexColangelo/Twitter)

TORONTO -- The City of Toronto is expanding a pilot project that will soon see a fleet of mini snowplows clear narrow sidewalks in some of the city’s neighbourhoods, but the councillor behind the program says he wishes more could be done.

The city released a new report on Thursday that outlines the streets in Toronto’s downtown, midtown and East York neighbourhoods that will receive the new sidewalk snowplowing this winter.

Coun. Josh Matlow, who introduced the motion for the program earlier this year, said he’s pleased it is moving forward in areas where many seniors and people with disabilities live, but he feels upset that some neighbourhoods with similar demographics remain left behind.

“I'm upset about that. I would like to see every neighborhood in our city having their sidewalks cleared this winter,” he told CTV News Toronto on Thursday.

“Now more than ever, and people are experiencing the need to go for a walk and unfortunately far too many streets aren’t plowed.”

Most averaged-sized snowplows in Toronto cannot access narrower streets. The city reports that normal-sized machines clear about 82 per cent of sidewalks, but the rest rely on manual clearing.

Matlow said that the debate to get additional snowplowing and the technology to target areas with narrow sidewalks has persisted for several years. However, he said his motions proposed to city council were struck down each time.

“I finally was able to get a motion approved that took more incremental approach. So at least there would be a commitment to consider fully providing the service as part of next year's budget,” Matlow said. “That was the compromise that I needed to arrive too even get it approved by council.”

Matlow said he agrees with criticism that some lower income and racialized communities are left behind in the pilot program, although he stressed that staff probably did not intend for that to happen. He stressed, however, that sidewalks not cleared can be very dangerous during icy winter conditions.

“Anyone who criticizes that it's not coming to their neighborhood or it's not addressing the needs of lower income or racialized neighborhoods, I think those are fair criticisms because they should have it too,” he said.

“I feel both upset that it's not in every neighborhood yet, but I also am grateful for the progress that we've made. It’s more progress than we’ve made in years.”

He said the city chose the current routes according to the areas where seniors or people with disabilities, who are registered with their manual snow-clearing program, currently live, which include about 1,443 houses.

He said city staff also got information from councillor about where they are getting many complaints about snow clearance.

“I identified an area … that is the most, per capita, lower income and racialized community in my ward, and they don't have a single street in the entire neighborhood receiving this service under this pilot,” he said.

“I did bring that to staff's attention and, as the local councillor, of course I’m upset about that.”

The councillor said that accessible roads in the winter are even more important to residents across the city due to the COVID-19. He said most people rely on walks for exercise and for their mental health wellness.

The city has so far purchased nine of the smaller plows that will clean up snow in 230 kilometres of sidewalk in the chosen areas. The city will deploy the plows whenever two centimetres or more snow accumulates.

The pilot project initially began in Feb. 2020, but the city said it was not able to test the plows enough due to fewer snowfalls at that time. This year, the city said it would be able to evaluate the success of the program.

"The plows continue to be tested this winter season," a spokesperson for the city said on Thursday. "Staff intend to use information from the assessment/test to determine whether it's feasible to expand the mechanical sidewalk plowing program on a more permanent basis in the future." 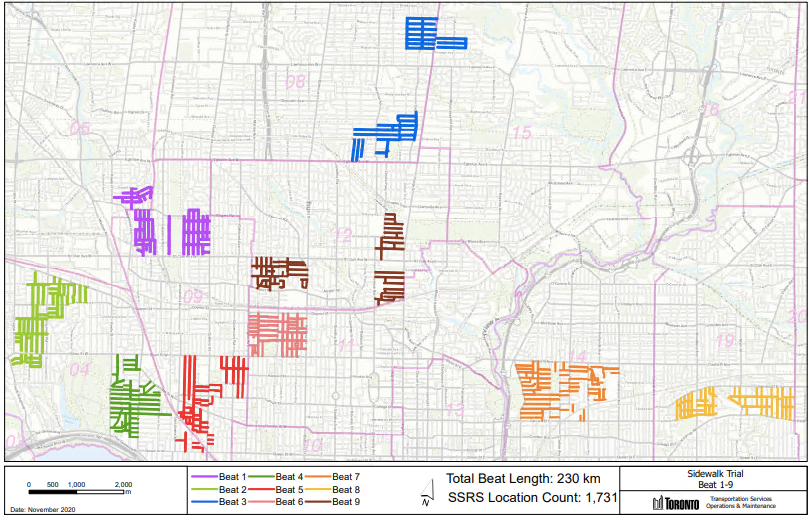 The following routes have been picked for the pilot project: